Naughty Books is a documentary featuring Kristen Proby, CJ Roberts, and Kelli Maine and a few others. I watched it last night and I thought it was wonderful and enlightening. I have been a book blogger since 2014 and it’s been an amazing ride with the book community. I have heard of all three authors but have only read Kristen’s books. I will definitely one-click the others after getting more of their stories. I have been following Kristen since I read Come Away with Me I believe a year after it was released and have read close to everything since. Two or three novellas slipped by me but on my kindle waiting. She was actually at one of my first ever signings in 2014 in Anaheim and she was with KP Simmons. I love KP and she is also in the documentary. It was fun to get to know the authors more personally through the documentary.
You will also get to know more about the behind the scenes with the community, business, and self-publishing Vs. Traditional publishing. It’s a lot more than just writing the words. It’s about getting the books out there. Meeting the fans and connections with fans. It’s a fun community, I love meeting authors just like a few in the documentary. I was at a few of the signings with my blog partner and even saw here in a scene. But, it’s also about the pressure of it too.
Overall, its was engaging and fun. It was wonderful to see more about their backgrounds and what their worlds are like behind the scenes. The interviews were awesome and the illustrations during readings was fun. I just love the community so much, it has changed my life in so many ways.

No one was prepared for the success of Fifty Shades of Grey. Originally written in 2010 as a piece of Twilight fan fiction and posted online, it eventually sold over 100 million copies, taking erotica mainstream. But women didn’t only read erotica in large numbers; they also wrote it. In the aftermath of Fifty Shades a cottage industry emerged around self-published romance novels. Once women who worked forty-hour-a-week jobs, living paycheck-to-paycheck, many of them are now New York Times bestselling authors with their own merchandise lines and die-hard fans. Naughty Books follows three such women: an Air Force vet, a telemarketer, and a hospital administrator who became millionaires in under a year by using pen names to sell erotica online. They garnered thousands of fans and secured lucrative book deals with major publishing houses by writing about good girls and bad boys finding love and having steamy sex. However, as more and more people saw writing erotic romance as a quick path to money and fame, the market became saturated with hundreds of romance novels published every month, making success difficult to maintain…

Naughty Books will be available to rent on October 13th across digital, cable, and satellite platforms. 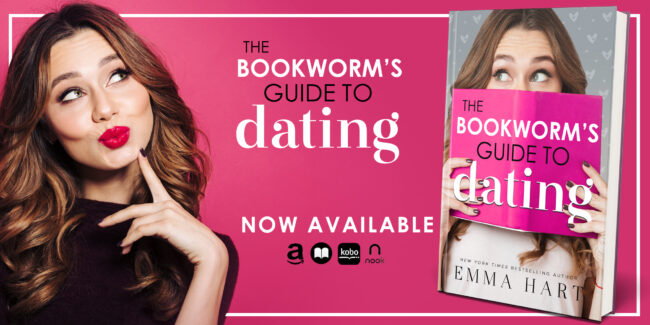 Let it be known that I, Kinsley Lane, am one hundred percent against being set up with somebody.

And I’m one thousand percent sure that Josh Carter is not the man to find me a boyfriend.

I mean, if I’m so great, why isn’t he the one dating me? (For the record, I don’t know the answer. That’s just what the guy on the internet asked.)

Still, I’ll humor him. If I go on his little dates, he’ll teach my bookish, introverted self how not to be totally, completely, utterly, unforgivably awkward on every single one of them.

And all I have to do is fall in love with one of the lovely gentlemen he’s serving up for me on a silver platter–all of whom fit my very specific guidelines.

If only I could stop falling for Josh.

The Bookworm’s Guide to Dating is the first book in the The Bookworms Guide series by Emma Hart. I love when my favorite authors start a new series, it’s just so exciting. I will say that I did met these characters in The Girl Next Door, a standalone. Now, this series is connected by three best friends who own a bookstore.

Kinsley is awkward, snarky, hilarious, and loves books. She also has a bit of a famous dating record, it’s a disaster. Now, that she is twenty-six she wants to try again. To date more. To find a man who can be her number two love, books will always be number one to her. She didn’t ask for help but her brother’s best friend, Josh offers to weed out the men on the apps. She didn’t want to say yes but she could get all the help she could get. If he wanted to find her a few dates and teach her how not to be awkward on them, then fine. What she didn’t expect was the butterflies…

She had never felt butterflies around him. Sure, he is cute and he accepted her rants about books Vs. movies. But never the butterflies. So why now when she was trying to date? Was it just because they were spending more time together or was it more? He was acting differently too like he enjoyed her disasters in dating. It was all confusing. She loved her angst in romance novels not in reality so wtf…

I loved it! Yes, I have loved the whole dating coach thing before but every single one is different. The characters. Their story. Their emotions. The banter. Omg, their banter, I loved it. They just know each other. How to push buttons and when to stop. These two made me laugh so hard. Swoon too. And laugh some more. I can’t wait for the next book. The side characters are the best.

I ♥️ The Grandparents. All of them. Maybe not Agatha. Lol

I needed to know if my heartbeats and my butterflies and my goosebumps were really because of him.

“We are not eating our ducks!” Mabel shouted. She really needed a nap.

“I’d eat them,” Grandpa said, but I couldn’t tell if he was being serious or just stirring the pot. “And take that godawful dress off Benjamin. He looks ridiculous.”

“Well, sue me for trying to book-woo you.”

He moved the umbrella so we were both covered by it. “Book-wooing: the art of applying fictional romantic notions to real life to woo someone.”

I blinked at him, fighting back a smile. “You made that up, didn’t you?”