Will this quarterback score the girl or make the biggest fumble of his life?

I Promise You, an all-new not-to-be-missed, new adult, sports romance sure to make you swoon from Wall Street Journal bestselling author Ilsa Madden-Mills is coming October 12th, and we have the first sneak peek! 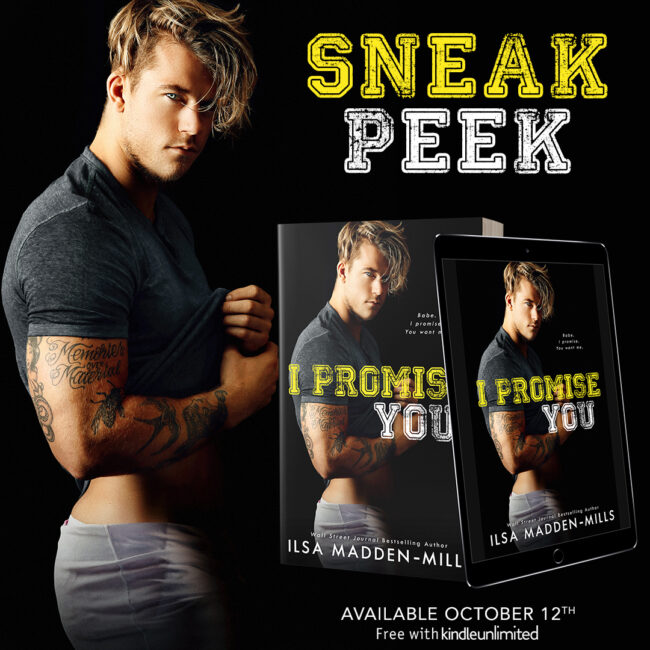 I can’t move. I’m rooted to the black and white linoleum tile on her floor as I stare at her. My chest rises, inhaling gulps of air. She took off her hat at the door, or somewhere, and pulled her hair out of her ponytail. Gleaming brown, copper, and blonde strands spill around her shoulders. Three colors in anyone’s hair should be over the top, but on her it’s…

My eyes scan over her face, clearly lit by the florescent lights in the apartment.

Adrenaline hits my bloodstream. Swaying on my feet, I right myself with effort. 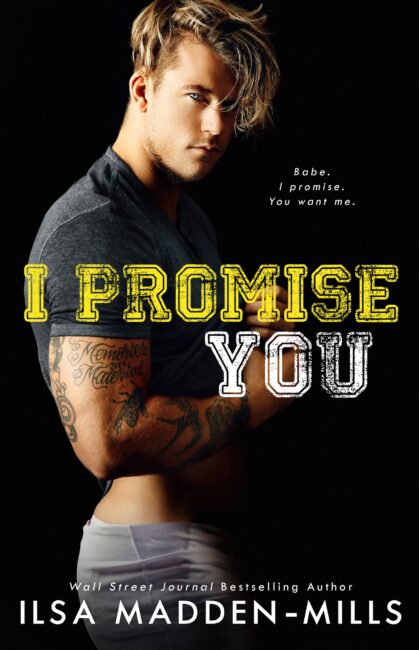 Dillon McQueen: Babe. I promise. You want me.

Serena Jensen: Um, who are you?

There’s a legend at Waylon University: the first girl you kiss freshman year at the bonfire party is the one you’ll never forget. She’ll crawl under your skin and never leave. She’ll spark a passion so fierce you’ll burn the world down to possess her.

As in all things with fate, timing is everything. That kiss can go horribly wrong. She might run in the opposite direction. And boy, did Serena run.

Dillon is Waylon’s hotshot quarterback with something to prove. All he wants is to graduate and make it to the NFL. What he doesn’t need is to finally meet the mystery girl he kissed at the bonfire freshman year. Isn’t it enough that she’s haunted his dreams for more than a thousand nights?

Fate laughs in his face when he runs into the quirky girl at the Piggly Wiggly. Surrounded by his entourage, he’s got all the Oreos in his cart; she gets revenge by buying every six-pack of his favorite beer.

Obviously, that legend is a curse. She’s not his type and hates him. Worst of all, how can she not remember him when she left a Serena-shaped hole in his heart for the past three years?

So why can’t he stop trying to win her?

Will this quarterback score the girl or make the biggest fumble of his life?

Add I PROMISE YOU to Goodreads: https://bit.ly/3hRezT9

Eight of her eleven novels have placed in the Amazon Top 10 Best-seller List: Dirty English #1; Fake Fiancée and I Dare You #2; I Bet You, Filthy English, and Very Bad Things #6; Boyfriend Bargain #8; The Last Guy, her collaboration with Tia Louise, #4.

A former high school English teacher, she adores all things Pride and Prejudice, and of course, Mr. Darcy is her ultimate hero.

Join her Unicorn Girls Group on FB, the best way to keep up: http://bit.ly/37B6Nay 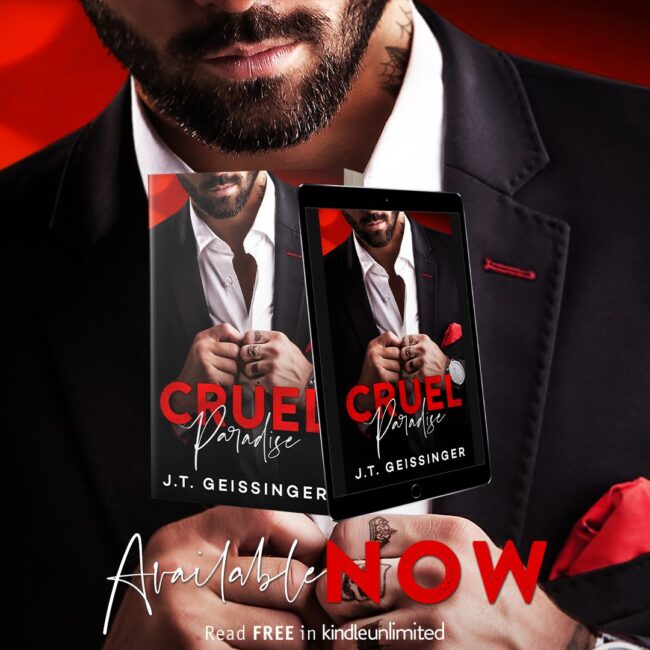 Cruel Paradise, the ruthless and steamy standalone in the Beautifully Cruel series from J.T. Geissinger, is available now!

You don’t know me. You think you do, but you don’t. The only thing you know is my name, and even that’s a lie.

I’m king of Boston, lord of criminals, ruler of an underworld empire.

Only one thing’s for sure: I operate alone.

Until I cross paths with a brazen little thief who sets my whole kingdom on fire.

Just as two wrongs don’t make a right, two villains don’t belong together. Especially since she’s the daughter of my most deadly enemy.

Taking her would start a war.

Keeping her would be suicide.

Making her mine would break every code of honor and defy all common sense.

Then again, where’s the fun in following the rules?

Download your copy today or read FREE in Kindle Unlimited!

Cruel Paradise is the second book in the Beautifully Cruel series. I am not sure if it will be a series or duet but so hoping it’s a series since I am loving it. You can read it as a standalone but I highly recommend reading Beautifully Cruel first to get the complete story even if different couples. I really can’t say much about it without spoiling especially if you haven’t read the first book yet.

Jules is a thief. Stealing from rich bad guys and giving to those in need. A modern day Robin Hood with her merry-women. Killian is the king of the Irish Mafia in Boston. A man you do not want to fuck with. When they cross paths, Killian instantly wants her and Jules wants to stab him in the eye. She knows his type and she is on no mood for it even with his Shakespeare lines, a body made for sin, and a side of sweetness with his alpha-ness.

She has secrets and he has more. They both want trust but who will give in first? He wants her kisses and she wants his head. She is confused, turned-on, and doesn’t want to end up like her mother. In love with the wrong guy only to be killed. He has never felt anything like what she does to him. She is sassy, smart, sexy, and sweet. She doesn’t back down for a fight and he is fighting for them with everything.

That’s all I can really say. I will say that I loved it, if I wasn’t getting ready to go camping I would have devoured it in one sitting but it took me close two days. Lol. Still good, right? Anyway, their banter is crazy hot, funny, and raw. They are on fire! I could feel it through my iPad. And sweet. Damn, I love the bad boy…

It’s true, the pressure of his hand on my throat is gentle, but still. “Then what the hell are you doing?”

He slides his thumb back and forth over the throbbing vein in my neck. “Feeling your pulse.”

Heart hammering, I stare at him. “Why?”

“Because I want to see how fast it gets when I kiss you.”

“Don’t ever say that again.”

“Actually, what we love is plunging a pitchfork through the chest of an annoying man who’s tied to a chair, then lighting him on fire.”

“Hmm. I don’t know if there’s an accent for that.”

Start the series of standalones BEAUTIFULLY CRUEL with here!

I climb into the car. The driver shuts the door behind me. In a moment, we pull away.

All heat and coiled tension, Liam simmers in the seat beside me.

After we’ve gone three blocks, he says, “How long are you going to make me wait until you look at me?”

“I’m working on regulating my breathing so I don’t pass out. Maybe ten minutes?”

His chuckle is low and sensual, raising my blood pressure by at least two hundred points.

“You’re tougher than that. I’ll give you ten seconds.”

When the seconds have ticked by, I turn my head and glance at him warily from the corner of my eye.

He stares at me with such blistering intensity that for a moment, I can’t breathe.

Holy mother of god, he’s handsome. How can someone so evil be so hot?

My exhalation comes out in a burst. It’s accompanied by a shudder. Then I clear my throat and pretend I’m a mentally functioning adult. “Hi.”

He lets his gaze drift over me, head to toe, taking in every aspect of my clothing, posture, and expression.

“You still don’t trust me.”

I make a sound that’s supposed to be a laugh, but it sounds more like a small animal being strangled. “Trust? I’m sorry, did you just say trust?”

He’s serious. I stare at him in astonishment. “Of course I don’t trust you! You’re…you!”

The driver pipes in from the front seat. “That’s hardly fair, lass. You’ve only just met.”

“Right. Sorry.” Falling silent, he turns his attention back to the road.

Liam smiles reassuringly at me. “It’s so hard to find good help these days.”

I look back and forth between them, gobsmacked by the whole situation. I could be hallucinating. Maybe that hipster bartender put something into my drink.

I’m still pondering that when Liam leans over and settles his huge, hot hand around my throat.

I grip his thick wrist in both hands, gasping and shrinking back into the seat.

Looking into my eyes, he murmurs, “I’m not going to hurt you.”

My voice comes out high and panicked. “This is a shitty way of proving that.”

It’s true, the pressure of his hand on my throat is gentle, but still. “Then what the hell are you doing?”

He slides his thumb back and forth over the throbbing vein in my neck. “Feeling your pulse.”

Heart hammering, I stare at him. “Why?”

“Because I want to see how fast it gets when I kiss you.”

He quirks one dark brow. “Why not?”

He leans closer, his eyes burning into mine, his body heat and the warm scent of his skin surrounding me. He growls, “If you were telling the truth, little thief, I’d honor that request.”

Instantly, he stills. His dark gaze searches my face. Then, slowly, his full lips lift into a smile. “Then I suppose I’ll have to wait until you are.”

He stares hungrily at my mouth for a moment before releasing me.

I remain where he left me, frozen and wide-eyed, slumped against the door, staring at him and trying to convince myself of several important facts.

One, that I should be afraid. Because, two, that there’s at least a fifty-fifty chance he’s going to snap my neck. And three, that I really didn’t want him to kiss me.

Especially that I didn’t want him to kiss me. Because what would it say about my sanity if I did?

Adjusting his tie and looking straight forward, he says, “Don’t overthink it. But thank you for being honest. If this is going to work, we have to be honest with each other.”

My laugh is weak and disbelieving. “This? There is no ‘this!’”

He turns his head and sears me with his gaze. “Aye, lass,” he says, his voice thick. “There is.”

J.T. Geissinger is a #1 internationally bestselling author of emotionally charged romance and women’s fiction. Ranging from funny, feisty rom coms to intense, edgy suspense, her books have sold millions of copies and been translated into several languages, including German, Hebrew, French, Czech, and Japanese. The film & TV rights to her Night Prowler series have been optioned by the BAFTA-winning studio that created VFX for movies such as Avatar, X-Men, and The Avengers.

She is a three-time finalist in both contemporary and paranormal romance for the RITA® Award, the highest distinction in romance fiction from the Romance Writers of America®. She is also a recipient of the Prism Award for Best First Book and the Golden Quill Award for Best Paranormal/Urban Fantasy.

She’s a Southern California native currently living in Nevada with her husband and rescue kitty, Zoe.