If a trail of broken hearts, and a piss-poor record of failed relationships have taught me anything, it’s this.

My buddies are happy to give me shit about my latest breakup from here to next Sunday. Thanks, but I’d rather have a root canal.

At the same time.

But my relief comes in an unlikely package—the gorgeous and feisty Maren. She just so happens to be my friend’s sister, so that’s not awkward at all.

But I’m a man on a mission, and Maren is down to teach me all the ways I’ve been failing as a boyfriend. Apparently, there are many. And it’s all very informative—until I start to catch feels.

Now it’s not just my reputation on the line, but my heart too.

The Boyfriend Effect is the first book in the Frisky Business series by Kendall Ryan. I love when authors start a new series! New characters. New storylines. New connections. This one is connected by five friends who own toy business. Frisky toys. First up is Hayes and his best friend’s little sister, Maren.

Hayes is a serial monogamist. He dates a woman for a few weeks to a few months and then it’s over. His heart has never been broken over them so he thinks he is broken. He wants a forever with someone. A family. But right now after his last breakup, he just wants a break, period. The only woman he wants in his life right now is his best friend’s sister. They are friends and have been for twenty years even when she was the little sister who followed them around everywhere. And when she breaks down about work, he offers to help. A project is a perfect distraction and he could never say no to her. Maybe she could help him as well…

Maren didn’t expect him to offer to help but she isn’t surprised. He is her safe place. Always. The only problem was that they would now be in the same room alone for hours at a time for the next month. She has a hard enough time hiding her life-long crush on him. She should be used to hiding her blushes and ogling but she is not. And when the unexpected happens on a weekend trip with friends to Hayes’ family’s cabin…things get real. But can it truly be?

Aw! I love these two. Hayes and Maren are so sweet and hot at the same time. They made me laugh, smile, swoon, blush, and heat up. I can’t wait for My Brother’s Roommate!

I did it. I survived. I made it one night alone with Maren without putting my hands all over her.

And it was absolute fucking torture.

“Your five minutes are up. Time to be a savage.”

“It’s not cute, Mare. It’s weird. And ballsy, but not in a good way. I don’t know this guy. For all I know, he’s just trying to steal Rosie’s social security checks.”

The Boyfriend Effect is the first book in the Frisky Business series by Kendall Ryan. When one of my favorite authors starts a new series I get giddy! I’ve been a fan of Kendall’s for a long time and I love when we meet new characters. This series is going to be so good! Five friends who own Frisky Business, an adult toy company. Hayes isn’t known for his relationships. He’s a good guy, but staying with a woman long term isn’t something he does. Maren is his best friend’s sister. Who he’s had more than friendly thoughts about for a long time. When he offers to help her with a problem at work they start to spend more time together. Alone. Maren never in a million years thought Hayes would be interested in her as more than a little sister. But he can’t hide his body’s reaction to her. It’s a very bad idea, but a very good thing. Neither of them wants to hurt her brother, but they just can’t stop wanting each other. Is it possible to fall for your brother’s best friend and get everything you’ve ever wanted? Oh man! I really loved this story! Hayes is so funny, and cute, sexy and sweet. And Maren is adorable, loving, sweet and funny. They are the perfect match! Kendall gives us all the feels without all the angst. I’m looking forward to the rest of the series!

A New York Times, Wall Street Journal, and USA Today bestselling author of more than three dozen titles, Kendall Ryan has sold over 3 million books and her books have been translated into several languages in countries around the world.

Her books have also appeared on the New York Times and USA Today bestseller lists more than 100 times. Ryan has been featured in such publications as USA Today, Newsweek, and InTouch Magazine.

Subscriber to the newsletter: http://www.kendallryanbooks.com/newsletter/ 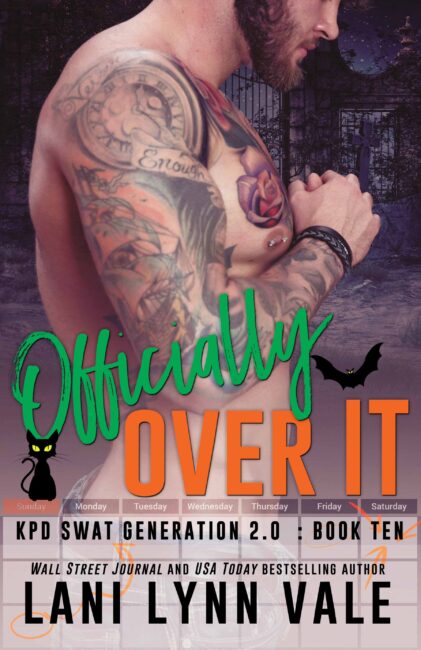 Going from a professional baseball player to a SWAT officer should’ve been seamless. Should have been.

All it took was one single calendar shoot for word to spread that Nathan Cox was not only no longer playing professional baseball, but he was also the man behind saving the life of Reggie Morton, the City of Kilgore’s princess.

Reggie didn’t know that by agreeing to provide the expertise and the know-how for the Police Officer’s Ball that she would be required to actually attend the function.

What she also didn’t expect was needing to be saved—again—by the same man that had saved her life a year ago when she hosted her debut event.

This time in a not-nearly-as-spectacular way. The moment she falls into his arms like a modern-day Cinderella and takes him in in all his three-piece suited glory, she realizes that she’s been fighting the impossible.

Officially Over It is the tenth book in the SWAT Generation 2.0 series by Lani Lynn Vale. I can’t get enough of these SWAT members and their stories! It’s Nathan’s turn and oh man, I knew this was going to be good. Nathan and Reggie have known each other since they were kids. They competed against each other, fought with each other but there was always this attraction simmering beneath the surface. Now they are back in the same town and running in the same circles. Neither one of them knowing the other has had feelings for them for years. They’ve been good at hiding it, but now they need each other and it’s game on! They are tied to each other and why not make good use of the time. Living out the fantasies they’ve been dreaming about. What starts as a hate/love relationship quickly turns into a love/love. It’s hot, sexy, sweet and fun. I love Nathan and his sexy wink and his positive attitude. Reggie is so smart, funny and a little thief! There were some twists and turns and I loved every minute of the story!

He winked at me and closed the door, and I was struck with a mild heart attack at a wink, aimed at me, on Nathan Cox’s face.

I’m not sure how many Hershey Kisses equals happiness, but so far, it’s not 27.