Release Blitz & Review – Take a Chance with Me, Kristen Proby

Take A Chance With Me by Kristen Proby is now live!

A friends to lovers, soulmates story from Wall Street Journal and USA Today Bestselling author Kristen Proby, set in her beloved With Me In Seattle Series!

Cameron Cox has mastered the art of keeping secrets. His talent for computer hacking means he’s been recruited for highly classified jobs since leaving the military. He travels the world, risking his life. But his biggest secret isn’t from a government job or a foreign spy. It’s Maggie O’Callaghan. He’s loved her from afar, always standing by as the friend. He’s been her rock through the hardest days of her life. But after his dangerous past comes crashing into his life and threatens the only woman he’s ever loved, he has a choice to make. Give up the secrets and win her heart. Or watch Maggie walk away with his.

Take a Chance With Me is the fifth and final book in the The O’Callaghans series and the eighteenth in the With Me in Seattle series! I have read most of each series and I can’t get enough. I need to 100% complete the series and I will do it dammit. Anyway, the last O’Callaghan is up! It’s Maggie’s turn to fall…
It almost happened two years ago. Maggie was so close to getting exactly what she wanted. More than she ever wanted then it came crashing down and the next two years was torture. Two years of sass, secrets, and sexual tension. Maggie was married to a man who didn’t deserve her, he was always away and she won’t do that again. Joey was an asshole, the complete opposite of her brother’s best friend, Cameron but she is afraid to get hurt again. And it doesn’t help that he can’t tell anyone what he does for work. Nothing. To nobody. Not even the woman he has wanted for years. Can he prove to her that he is worth the risk?
Aw! Maggie and Cameron are adorable. He is a sweetheart but has a dominant side in the best of times *wink, wink*. And Maggie is stronger than she believes. She is the sweetest with a twist of a fiery temper. She is also talented AF. I just love them together. Great banter. Passionate. Fun. It was awesome catching up with the rest of the family and of course some cameos thrown in.
Quotes:
“You have a lot of questions, don’t you?”
“I always do. Drives everyone bonkers.”
“Oh, God,” Maggie moans as she tries her potatoes. “I don’t know what they put in here, but I need the recipe.”
“Moan like that again, and I’ll have you on this table.”
“Did I pass that test?” Brian whispers to me.
“So far. Don’t fuck it up, and you’ll stay alive.” 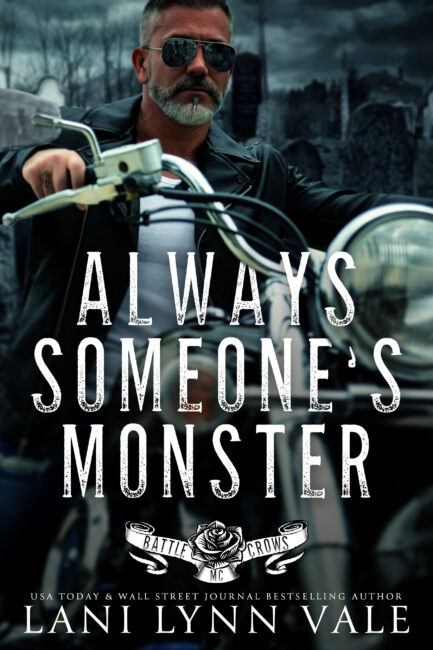 A few years ago, when his sister went missing, Haggard Crow turned into something he never wanted to be. A killer.

Even after his sister is rescued a year after she was kidnapped and sold, Haggard ‘Thief’ Crow doesn’t have any plans on changing. He sort of likes the zero fucks given guy that he is now.

Bonus points, he saves women and children from extreme situations, along with his club and real life brothers by his side.

After a horrible marriage, Haggard has zero plans of ever finding a woman again. One-night stands not counting, he adores his life as a single man. There are no expectations. No ‘where are yous’ and ‘are you coming homes.’

The life he chooses to live is a simple one. Until he makes a huge mistake, and he steps over that line between ‘daughter’s best friend’ and ‘a woman he desperately wants.’

Before long, he can’t stop thinking about her. Can’t stop wanting her. Can’t stop feeling things for her that a man twenty years her senior should never feel for a girl he watched grow up.

After one lapse in judgment, he decides she needs to go. But the funny thing is, he never expected Sophia Madden to fight back. And dirty at that.

Add to your TBR: https://bit.ly/3BGUrgG

Always Someone’s Monster is the first book in the Battle Crows MC series by Lani Lynn Vale. This isn’t your mamma’s romance novel. I’m still recovering from Jerk It and now we get another level of intensity and emotion. This is Haggard and Sophia’s story. We’ve met them in previous books. Haggard is Cannel’s brother and Sophia is Madden’s daughter and Jasper’s sister. This is a very emotional best friend’s father love story with a pretty big age gap and I loved every second of it. I don’t even feel like I can accurately describe my feelings without giving too many spoilers. I just loved the connection between Sophia and Haggard since they have known each other since she was young. He didn’t start to see her as a woman until she was past legal age and he tried to stay away from her, but something always keeps putting them in the same place. He’s not a bad guy, but he does do bad things. They are always for the greater good, but his life is dangerous. Sophia just doesn’t care. She’s had a crush on him for a long time and this is her chance. I loved their relationship and how all their friends and family were fine with them being together. Even knew it was coming. It’s sexy and fun and a little dirty. I cried really happy and shocking tears and then really sad and shocking ones. My emotions were all over the place. Oh yay! Oh no! Oh my God, what? Lani really put me through the ringer with this one and I can’t wait to see what’s going to happen next with this series!

Getting Real by Emma Chase is now live!

Connor Daniels never thought he’d be starting over at dating square one. His career as a successful doctor, and his three boys, are everything to him. It’s not exactly a setup conducive to a scorching love life—but he’s giving it a shot.

ER nurse Violet Robinson never intended for Connor to find out she’s had a crush on him forever. It was a dirty little secret only meant for her dirty dreams. Her heart trips every time he’s around—and so do her feet.

When Connor sees Violet coasting across the grocery store parking lot—and she falls on her face—he starts falling for the gorgeous, young nurse right back.

Dating can be tricky. And life can be beautiful and crazy and unpredictable. But when it gets real, you discover what matters most . . . and the one person you want loving you through it all.