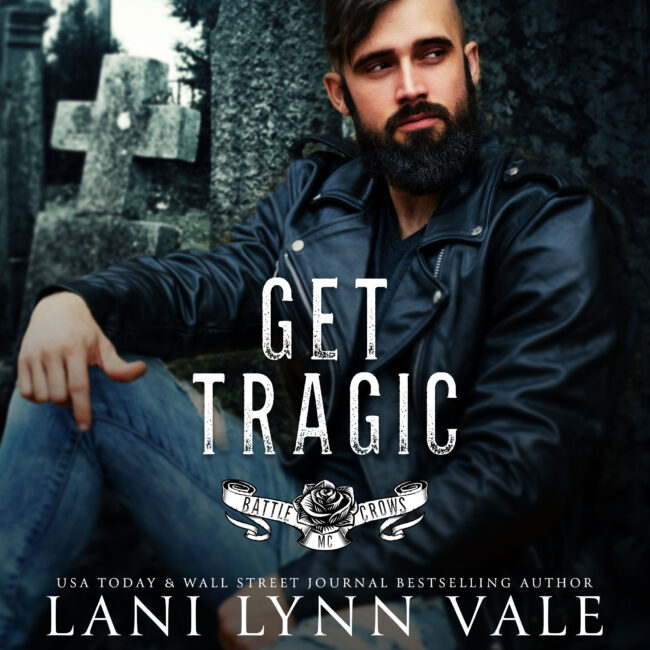 Usually when you find out you have a stalker, you don’t fall in love with him.

But Banger Olivia Crest isn’t your normal, run of the mill, everyday girl. Banger is a truck driver who just so happens to know how to sling drinks in her spare time.

She’s had a bad hand dealt to her time after time, and the last thing that she wants is to go all in. At least, that’s until she meets the geeky biker with his shy looks, and his surprisingly awesome fighting skills.

Easton McKennick, ex-FBI agent and newest member of the Battle Crows MC, never really intended to actually reveal that he’d been stalking Banger since his early days in the FBI. In fact, he never intended to do anything at all when it came to the woman that held his heart.

That was, until she offered to be his fake date to a police ball that just so happened to be where his own stalker would be. To sell it that he was happy and he’d moved on from his previous relationship, Banger and Easton pretend they’re a couple.

All it takes is two hours for them both to realize that there’s not very much pretending going on.

The only problem is, Easton’s stalker put a bull’s-eye on their backs, and they don’t know how to fix it.

Get Tragic is the fifth book in the Battle Crow MCs series by Lani Lynn Vale. This is Easton and Banger’s story! I’m really enjoying this series and I had already fallen for Easton. We’ve been learning stuff about him over the last few books and I was so excited to learn more about the sexy, shy man. He’s been pretty much stalking Banger for years. He’s been chatting with her at the bar where she works, but never got up the courage to ask her out. Banger always thought Easton was intriguing and sexy, but when she quits and needs a place to live, she finds herself living with Easton. Now that they are spending more time together, the attraction is crazy hot. He finally admits to her that he’s been stalking her and she doesn’t even care. It just means she doesn’t need to explain all the horrible things that have happened to her in the past. Easton has always had a thing for her and now that she’s in his house, it is on. He knows once he touches her, he’s never giving her up. Easton also has a stalker and now that he and Banger have been seen together she keeps showing up. Trying to get Banger in trouble and then it gets worse. Now Easton and Banger have to worry about their lives. Good thing his brother, Trouper, and his MC brothers are there to help. Along with his team (who I love and hope we see more of). It’s a fast paced, fun, sexy story with some suspense and lots of laughs. Looking forward to more from the series!

I didn’t mean to say I was engaged to a hot billionaire–it just slipped out.

I didn’t mean to say I was engaged to a hot billionaire–it just slipped out.

In my defense, I’d had a really bad haircut, a really strong drink, and I was trying to save face in front of the Mean Girl at my high school reunion.

Lucky for me, I happen to know a hot billionaire. Hutton French and I have been friends forever, and even though big social gatherings are not his thing, I called him from the coat closet and begged him for a favor–show up and play my fake fiancé for the night.

Except that word of our engagement spreads like wildfire. Our families are ecstatic. We’re front page news. My little food blog is launched into the stratosphere.

Of course, I offer to set the record straight right away, but Hutton wants to give it a little time–the phony engagement will keep his matrimony-mad mother and every matchmaking granny in town off his back.

He even suggests I move in with him to make the ruse more real.

And we don’t stop there.

We practice kissing. Undressing each other. Saying things–and doing things–we’d never dare if we weren’t pretending. Because it’s all for show, right? We’re just role-playing. Hutton doesn’t want a real relationship, and I don’t want to get hurt. But the more time we spend faking it, the more I start to wonder.

Could Hutton French and I actually be right for each other, or is it all just one big tease?

Tease is the eighth book in the Cloverleigh Farms series by Melanie Harlow. You can read each book as standalone but I recommend reading the series since interconnected. And this is the third book in the second generation! It’s time for Mack and Frannie’s daughter, Felicity to find her happily ever after.
Felicity wasn’t part of the it crowd in high school so she really wasn’t looking forward to her high school reunion. She was only going since she was catering the appetizers. She knew she would be running into the mean girl but what she didn’t expect out of her mouth was telling her that she was engaged to a hot billionaire. Not only a hot billionaire but her best friend, Hutton. It was time to send out the bat signal and get him to the party. The lie was only supposed to be for an hour tops but she should had known it would be all over time by morning…
Apparently, everyone knew this was going to happen. Fifteen years of friendship and never once had they crossed the line but nobody was shocked by their engagement except them. They had to go through with this. It had its benefits. It was only going to be for a month. No big deal. Some hand-holding, some kissing, some make-believe. And it was make-believe until it starting feeling too real. They had a plan. No one would get hurt. It was just some fun but could it really be more?
Holy. Hotness. It was always the quiet ones, right? Hot damn, Hutton is ridiculously nerdy hot. Felicity and Hutton always saw each other but now, it was more intense, emotional, and right. I loved these two. They are both adorable and sexy AF. They made me swoon, laugh, and cry! I can’t wait for the next book.
P.S. Make sure to get the bonus scene!
Quotes:
“I could practice undressing you.”
“I definitely think you should,” she panted.
She was familiar to me, and yet she was a revelation.
“Those heels have been driving me crazy all night. I want to do such bad things to you in those heels.”

About Melanie Harlow USA Today bestselling author Melanie Harlow likes her martinis dry, her heels high, and her history with the naughty bits left in. When she’s not writing or reading, she gets her kicks from TV series like Ted, Lasso, Schitt’s Creek, and Fleabag. She occasionally runs three miles, but only so she can have more gin and steak.

Melanie is the author of the BELLAMY CREEK series, the CLOVERLEIGH FARMS series, the ONE & ONLY series, AFTER WE FALL series, the HAPPY CRAZY LOVE series, and the FRENCHED series. She lifts her glass to romance readers and writers from her home near Detroit, MI, where she lives with her husband, two daughters, and pet rabbit.