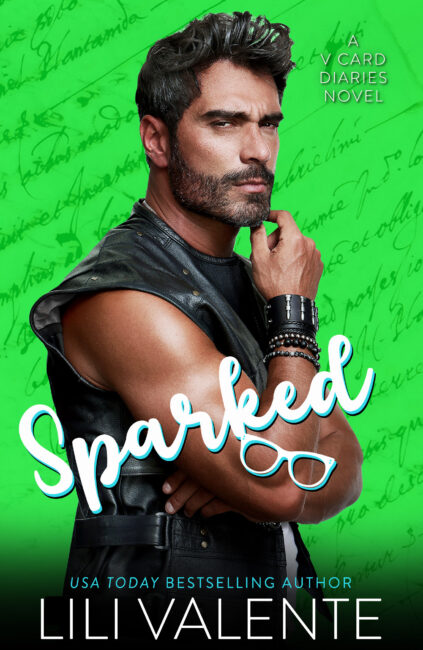 Seven years ago, Sam and I were best friends and the goofiest computer nerds in New Jersey and, possibly, the world.

We also made a pact to meet up and get busy if one or both of us were still virgins by our twenty-fourth birthdays.

I assumed that was a silly pinky swear we’d both forgotten about until Sam shows up at my twenty-fourth birthday party, ready and willing to make good on our bargain.

Boy is he ready…

Gone is the lanky kid with glasses who made me snort-laugh when we played video games. In his place is a sex god with massive biceps, designer clothes, and a smolder that transforms women to quivering puddles of lust.

I’m out of my league with this new Sam.
But I’m also every bit as drawn to him as I used to be.

So, when he dares me to give him a chance to prove he’s still the same trusted kindred spirit I remember, I agree.

What do I have to lose, aside from my V Card?

Sparked is the fourth and final book in the V-Card Diaries by the fabulous Lili Valente. I’m loving this series and have been waiting for Jess’s story! The brilliant game designer finally gets her second chance with her childhood best friend. Jess hasn’t seen or heard from Sam since high school graduation and now he shows up at her twenty-fourth birthday party with a job offer and to collect on their pact to sleep with each other if they are both virgins when they are twenty-four. Sam never forgot about Jess. She’s his person and it was time he finally came home for her. She’s still as beautiful as he remembers, and sassy and spunky and smart. He just needs to convince her to take a job and spend time with him. Except he’s keeping a few secrets. He’s not about to go down without a fight. He just needs to convince Jess he’s worth it. I love Jess and Sam! I love that he grew up to be extremely handsome, but he doesn’t even realize it. And Jess is so funny and cute. Together they are a match made in heaven. I loved seeing Evie and Harlow again. I will miss these characters!

Sparked is the fourth book in the V-Card Diaries by the hilarious, Lili Valente. You can read each book as standalone but I recommend reading the series since this crew is friendship goals. Jess is the the last virgin in the household and her childhood friend just showed up to collect on their pact…
Sam and Jess made a pact the summer before senior year at coding camp that if they were virgins at twenty-four, they would be each other’s firsts. Six years after disappearing after graduation Sam walks back into Jess’s life on her twenty-fourth birthday. It was very unexpected and confusing. She didn’t think she would ever see him again. Was he there just to have sex with her? Was he really a virgin when he looked that good? He was not the lanky, nerdy teenager of her past. He had muscles, wore leather, and overall delicious-looking. And his flirt game was panty-melting…
Sam had to see her. For more reasons than their pact. He had two weeks in NYC to prove to her that he can be trusted with her heart and her lady-parts. He knows he fucked up all those years ago but he was here now to set the record straight. Will he be able to break down the walls Jess has setup around her?
These two are so much fun! I have been waiting for Jess’s story and it was so worth the wait. She is a badass game designer who doesn’t let many people into her world. Sam is nerdy-hot. Together, they made me laugh, tear up, swoon, and laugh some more. I am excited about what is coming up next and hope to see all these characters again.
Quotes:
“I have an appreciation for odd. And the way your butt looks in tight pants.”
“I’m a fan of your butt in tight pants, too,” I murmur, dropping my head closer to hers. “Another reason we should burn these khakis.”
“You’ve been glowing, honey.”
“Sparkling like you fell into Evie’s glitter stash,” Harlow agrees.
“You’re my dark ring of power, Sam. I’m helpless against your vibes, and it scares me.” 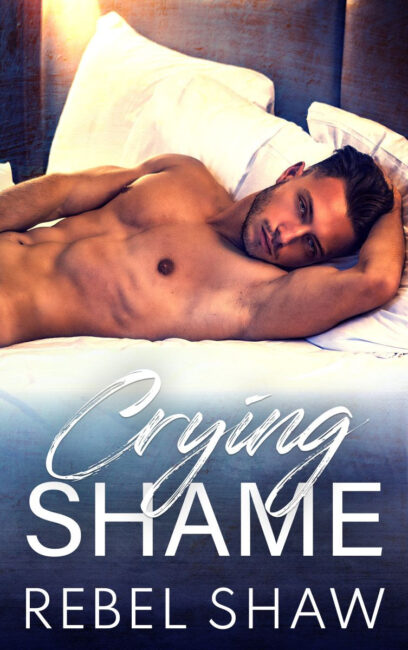 Life just threw me a curveball. I have to find a new place to live, but it must be in-district, because my son has his heart set on riding the bus to his first day of kindergarten.

When my brother’s sexy best friend suggests we move in with him, I have to remind myself the offer was for his spare bedrooms… not his bed.

Graham was my childhood crush and being in proximity with him is bringing back all kinds of feelings I thought were long gone. Looks like this time, he’s experiencing them too.

The problem is, now I have a son to think of. We’ve been through enough, and I can’t risk his heart… or mine.

My gorgeous new roommate is off limits. Not only is she my best friend’s little sister, she’s a single mom looking for help… not a hookup.

From the moment she’s under my roof, sparks fly, and suddenly the girl I’ve known my whole life becomes the woman I want long term.

I know I should stay away. Addyson deserves better than sneaking around, but she’s afraid to give me more. Plus the little boy she’s trying to protect… he’s already stolen my heart.

To let her get away… let them get away, would be a crying shame.

Crying Shame is a new standalone by Rebel Shaw. It’s their first standalone actually and I am here for it. I loved Royal and this book is just as amazing but with a different feel. It’s more about family.
Graham and Addyson have known each other for most of their lives. Graham is Addyson’s older brother’s best friend and have been best friends since they knew what the word friend meant. And Addyson has had a crush on Graham since she was a teenager. When she got pregnant, she had to let her crush go. She had a little man to take care of and Graham wasn’t exactly a serious relationship kind of guy. He still wasn’t. That was until he saw Addy in a different light. It was like a light switch. One minute he was the protective friend and the next he wanted her like no other woman. It was a total shock to his system and Addy was even more confused…
Did he only want her now since she needed a place to stay after her apartment was flooded? Did he really understand that her and Noah, her five-year-old son were a package deal? Graham was always there for her but this was different. This was everything and Addy didn’t know what to do with that. She could handle her heart being broken but not Noah’s. But damn, the man was easy to fall for especially when she had dreamed about this for years.
I ♥️ Graham and Addyson! They are adorable, sweet, flirty, and hot AF. They just click. I also love Noah, that little man is adorable, smart, and his bond with Graham is goals. Maybe one day we will see these characters again, I can only hope.
Quotes:
“You’re Addyson. Sexy as fuck, a kick-ass mom, a loving sister and daughter, and the woman I can’t stop thinking about.”
“I’ve been dying to kiss you all day,” I whisper, turning us so she’s out of sight in case her son returns.
“Yeah? Prove it,” she whispers, her sweet voice all breathy.
“You make it impossible for me not to fall for you.”
“I’ll catch you. My arms are wide open. I’ll catch you both.”
AUTHOR BIO

Rebel Shaw is the alter ego of the romance writing duo Lacey Black and Kaylee Ryan.