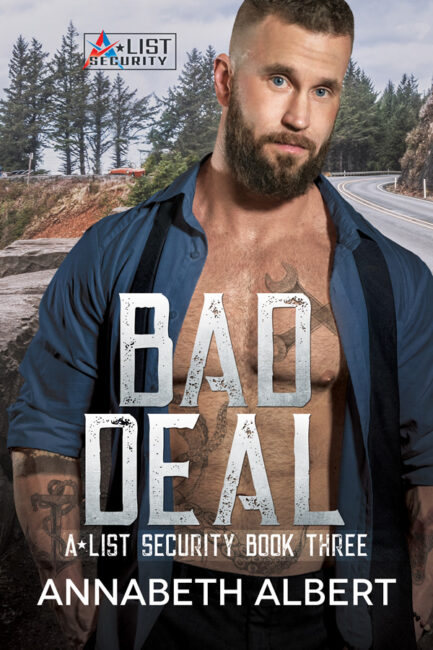 I’m a bodyguard and far from ideal boyfriend material, but agreeing to this fake dating scheme might be the best bad deal I’ve ever made…
I’m a fixer. As a SEAL chief, I succeeded in impossible no-win situations. Now I’m retired and determined to improve the lives of my former military teammates through our Hollywood security firm. Plus, I get to guard intriguing people like Ambrose Sterling, creator of one of my favorite TV shows.
Of course, I want to keep Ambrose safe. When he’s attacked, I leap into action to save him and his scrappy little therapy dog.
But my good deed results in a coastal road trip with me pretending to be Ambrose’s boyfriend to keep him out of more danger.
I don’t do relationships, and I’ve never thought about dating a man before, but here I am, sizzling with every touch and dreaming about more stolen kisses.
Each night of white-hot passion brings us closer to an unbreakable bond. But I’m blue-collar, and Ambrose is Hollywood elite. I want a happy ending more than anything. Can I turn this fake boyfriend gig into the real thing, or am I just a guest star?
BAD DEAL is book three in the A-List Security series. It features a highly protective SEAL bodyguard, a suit-wearing silver fox, an adorably ugly dog, and all sorts of brand-new emotions. Get ready for all the high heat, big feels, and found family feels readers expect from this fan-favorite military romance author. Join A-List Security for this lower-angst series featuring former SEALs and the celebrity clients who win their hearts. Happy endings and no cliffhangers guaranteed! 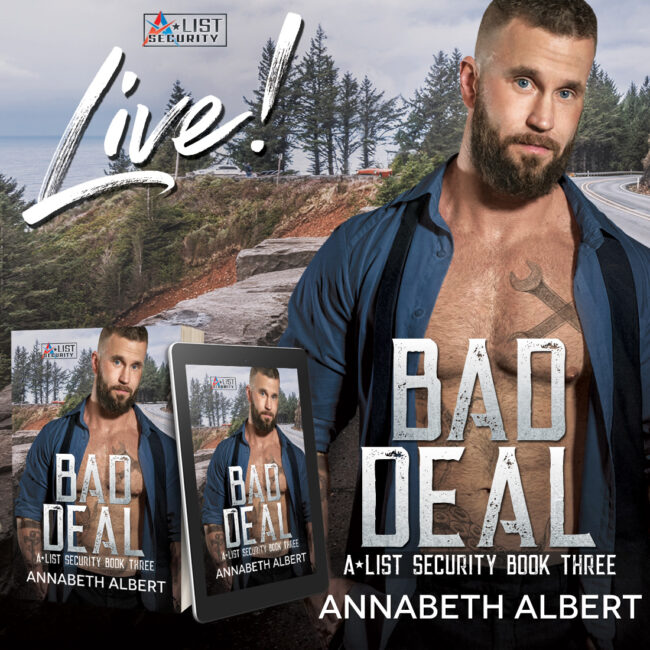 You can grab your copy here: readerlinks.com/l/2689757
Kara's Review

Bad Deal is the third book in the A-List Security series by Annabeth Albert. I’m really loving this series of these retired SEALs and the men they fall for. I’ve been waiting for Harley’s story since the first book! Harley takes his job very seriously. He’s also a nice, caring and laid back guy. He’s a retired chief so doing security is perfect for him. His current job, security for a tv show, one of his favorites. Guarding the creator of the show, Ambrose, is truly a pleasure. When Harley saves Ambrose from an attack, they get to know each other better. Their banter is so fun and Ambrose’s dog is the most important secondary character! Harley learned a lot about himself by watching this show. He’s not straight like he always thought. He’s pan and he’s attracted to Ambrose. He’s not struggling with it, he’s just trying to understand where he goes from here. When he needs to be a fake date for Ambrose to a family wedding, taking a road trip and spending time with Ambrose is just what he needs. They open up to each other about their families, their dreams and their attraction for each other. What happens when the pretending becomes real? Oh man! I loved Harley and Ambrose. I think this might be my favorite of the series. Harley was unexpectedly romantic and the right amount of dirty! They thought they were opposites, but found out they have more in common. It’s a slow burn romance that kept me entertained the entire way! I was excited when I found out this wasn’t the end of the series, so hoping we get to see more Harley and Ambrose!