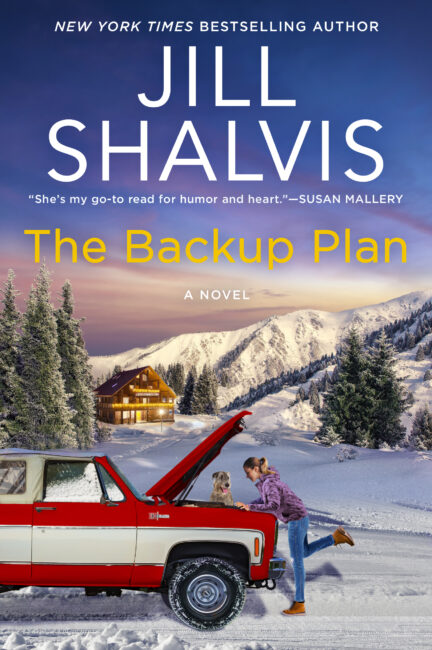 An unexpected inheritance might be the gift of a lifetime.

New York Times bestselling author Jill Shalvis returns to Sunrise Cove with a heartwarming tale of three people who are bought together when they’re bequeathed an old Wild West inn that has the potential to pull their lives apart, but instead turns into the gift of a lifetime.

When Alice receives a call about an unexpected windfall, she’s stunned to learn the gift is a falling-apart-at-the-seams old Wild West B&B she once considered home—and she’s inherited it along with two strangers. Except they weren’t always strangers. Once upon a time, they were friends. One is her ex-BFF Lauren. The other is Knox, the only guy to ever break her heart, all while never even knowing she existed.

It turns out their lives are unknowingly entangled because they once separately helped the same woman without expecting anything in return. Years later, Alice, Lauren, and Knox are broken in their own way, with their own history—and secrets— causing them to start out on the wrong foot with each other. But according to the will, they must renovate and be partners in the inn for one year or else lose their inheritance.

Stuck together, they make a list of rules to keep the peace—rules that end up doing the opposite, but by some miracle they find what they didn’t even know they were looking for—acceptance, true friendship, and in a case (or two!), true love.

Add The Back Up Plan to Goodreads: https://bit.ly/3ABIJ8Q

The Backup Plan is Jill Shalvis’ newest addition to the Sunrise Cove series. It’s a second chance at friendship and finding love. Alice, Lauren and Knox are all given an inheritance. Each gets a third in an Inn and they only have thirty days to get it ready to re-open. Eleanor was someone important to all of them, in different ways, and she left it to them for a reason. They don’t even know why until they discover emails from her. While they are fixing up the place, they learn so much about themselves. Things Eleanor was teaching them. Things they were running from. Things they should run to. It’s not an easy journey, learning about yourself. Finding your strengths and weaknesses and letting people help you. Alice and Lauren were best friends and haven’t spoken in years. It’s time for them to fix their relationship. They are all they have left from their childhood. Knox and Alice have a history. They grew up helping Eleanor and Alice had a major crush on him. Now he sees her as an independent, sexy, fascinating woman he wants to get to know. What happens when the thirty days is up? Will they decide to stay and run the Inn? Together? This was such a fun, heartwarming story! I loved getting the three stories in one. I felt for all of them and was cheering for them! Overall, I laughed, cried and totally swooned over Knox!

Jill lives with her family in a small town in the Sierras full of quirky characters (Any resemblance to the quirky characters in her books is mostly coincidental). She does most of her writing on her deck surrounded by more animals than humans. Which is quite astonishing considering she’s a city girl who was plucked from the wilds of L.A. to the wilds of the Sierra’s. Most of her books come from a combination of hard work, cookies, and hot guy pics, and not necessarily in that order.

Jill often travels to reader weekends & conventions where she LOVES getting to meet and hang-out with readers. The only problem being she tends to get lost in her hotels. So if you ever see NYTimes Bestselling author Jill Shalvis roaming the halls, someone please return her immediately.

About the Book
Etienne LaFayette hits the ground running the moment he breathes free air after being paroled from a maximum-security prison in Texas.

He claws his life back from his brother-in-law who’d taken over his business during the years he’d spent as an inmate at Huntsville Penitentiary. Though it is hard, he puts his life back together in Accident, Florida.

Because one of his first clients is a beautiful, curly-haired woman that reels him in from the moment he first lays eyes on her. Only, before he can work his charm, she forms an opinion of him based solely on the person that he chose to work at his side, day in and day out. That opinion? Utter disgust.

Matilda Deveraux has been dealt blow after blow her entire life.

First with the death of her mom. Then living with a stepfamily that despises her.

Her entire life she’s been known as different. The “weird girl that creeps everyone out.”

It’s not her fault that she’s different, yet everyone, including Etienne’s assistant, treats her like she’s a menace to society.
Like she would be better off in a loony bin than gracing the streets of Accident, Florida.

After years of abuse from everyone around her, the last thing she needs is to be around a man that would have that horrible woman around him twenty-four seven.

As a result, she forms an opinion—something that people do to her all the time—and treats him accordingly.
Only, it turns out that Etienne isn’t who she thought he was.

He’s much, much worse. But only in the best of ways.

Cute but Psycho is the third book in the Gator Bait MC series by Lani Lynn Vale. We met Etienne and Matilda in Good Trouble and their story is an enemies-to-lovers romance! Etienne is friends with Bain and just out of jail. When he meets Matilda there’s something about her that he really likes. But she seems to hate him. He doesn’t know why, but he’s building her new clinic so he’s going to see her a lot so he has to get her to like him. Matilda has a crappy family. No one really loved her and she just wants to feel loved and safe. She also has sensory issues and people are jerks to her! She’s smart, pretty and speaks her mind. Once she and Etienne clear the air, she likes him again. They have a lot in common and he loves the things about her that make her unique. He knows just how to talk to her and give her what she needs. Their story was funny, sexy and emotional. It’s not my favorite of the series, I just couldn’t connect with these characters like  I usually do. But I’m looking forward to more from the series!