Wanting him is the riskiest play of all…

Miami star quarterback Jordan Barr is the hottest man that halfback Eric “The Brick” Higgins has ever laid eyes on, and he’s wanted him in his bed for years.

When a chance encounter puts the two pro football players in the same town, the same TV studio, and the same locked room, the sparks don’t just fly, they burn. The chemistry between them is intense, immediate, and explosive and Eric isn’t about to miss his chance to have Jordan off the field. He’ll have Jordan naked in his bed—rumors of game fixing haunting both of their teams be damned.

Eric is one extraordinarily stunning man, and Jordan would love nothing more than to show Eric what it’s like to be taken by someone who knows exactly what he wants, in the bedroom and out. But Jordan has bills to pay and far too many responsibilities to throw caution to the wind.

He has to resist. But it’s getting hard….

Play Hard is the first installment in a three-part MM romance trilogy and ends in a cliffhanger.

Play Hard is the debut for JT Fox. The Hot for Him series is off to a good start. I’m a big fan of the serial romance so I loved that it was short, hot and left me hanging. Jordan and Eric have known each other for years. They are brought together in the same town for the first time in years and the sparks fly. Eric has wanted Jordan for years and he’s not afraid to admit it. But, Jordan is not out and has people in his life that depend on him so he can’t risk the exposure. The interactions between Jordan and Eric are scorching hot! I had to fan myself. I love this story because it’s more than just a football romance. I can’t wait to see what’s next for these two!

“You look good half naked,” Jordan said, his voice rough.

He couldn’t imagine looking into Eric’s hungry eyes again and being able to walk away. There was something about him, something that drew him like an addict to a fix.

“Anyone ever told you how hot you are when you’re bossy?” 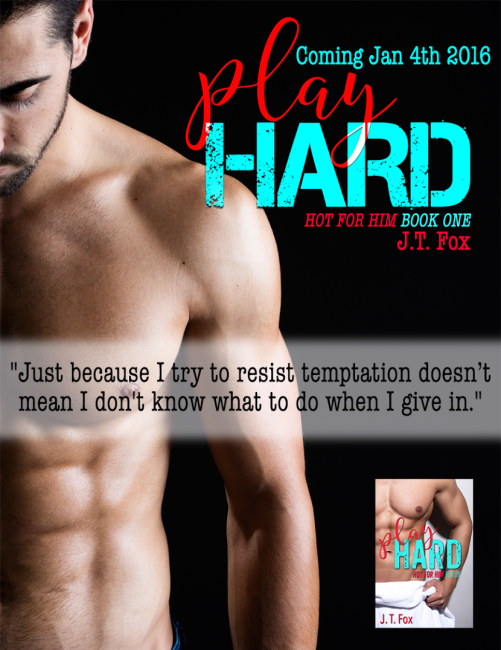 Play Hard is the first novella in a three part series and the first book by J.T Fox and was a debut! I need a hot and quick read and this was exactly that.

Eric and Jordan are NFL players are on rival teams that have come together for a great cause. They grew up in the same small town in Florida but were always on the opposite side during the games and in life. They haven’t seen each other since they were coaches at a summer football camp after high school and when they meet again, the pull is still there. They missed their chance that summer to explore it but is it too risky now?

Eric is straightforward with what he wants and that’s Jordan in his bed. Jordan would love the same but he has too much to lose if they are caught. He need to resist the spell Eric puts him under for his career and his family. It’s not only because he is in the closet but also there has been recent cheating scandals rumored in the league so players are not suppose to be in contact with players on opposites teams. Eric needs to think about the same rule but this, between them is too much to lose his chance again. But, is Eric ready for something more serious right now, is the reward worth the risk?

Ok…Play Hard is fucking hot but I can tell that the series is about so much more. It’s going to be emotional and sweet as well. I loved Eric because he is straight-forward, sexy, cocky in a cute way and funny. Then there is Jordan, the more serious of the two but just as sexy. I can see them balancing one another but will it be enough? What if they are caught? It will end before it even truly begins?

This was one Amazing debut and I can’t wait for the next book!! I. Want. It. Now.

Eric was like a third shot of whiskey—tempting, but a dumb idea, best avoided.

Eric smirked as Jordan walked away. “Quoting Pink. That’s not gay at all,” he mumbled as he finished off his scotch. 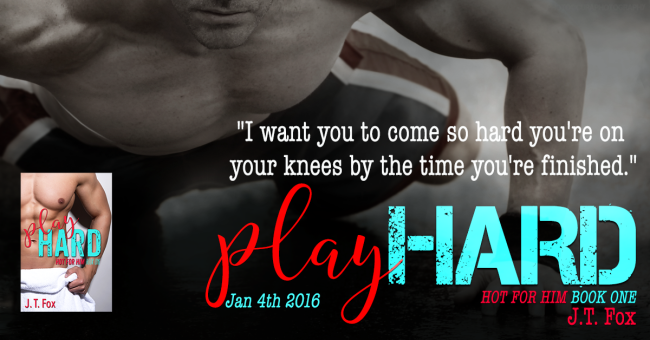 The last time he’d laid eyes on Jordan was the summer after high school, when they were both working as junior coaches at football camp. It was the summer Eric had embraced his inner horndog, getting it on with two older local guys after practice. It wasn’t until the summer was over, however, that he’d learned that one of those same studs had blown Jordan behind the movie theater.

Eric had spent a solid month afterward cursing his gaydar for failing him.

He had wanted to get his hands all over Jordan’s tight body for years—ever since that summer after high school. Jordan had always been a stunning specimen, and he’d only gotten better with age.

Hell, why fuck around? Jordan Barr was the hottest man Eric had ever seen in the flesh.

If Jordan only knew how many times Eric had taken his dick in his hand and pictured Jordan. Pictured taking him, touching him, sliding his fist up and down Jordan’s thick cock until the other man came screaming his name. Eric wanted to feel Jordan fucking his hand until he lost control, then have Jordan return the favor, pumping Eric’s dick until he couldn’t think…well, straight.

He imagined Jordan’s jaw would hit the floor if he knew he’d starred in so many of Eric’s fantasies he practically headlined the marquis. ’Course, if Jordan’s mouth were wide open, Eric knew exactly what he’d like to do with it—slide inside and get those full, sexy lips wrapped tight around his cock.

Get it together, Higgins.

Eric smiled as he shook Jordan’s hand, trying to play it cool, as if he hadn’t whacked off to imaginary Jordan a few hundred times. “We actually grew up together, but it’s been a long time.”

“It has.” Jordan nodded, his light blue eyes glittering with that same sharp intelligence Eric remembered. “I always respected your game, man.”

As he and Jordan shook hands, electricity shot between them, another lightning strike, and this time, the thunder-down-under decided to join the storm.

Careful, Eric. You’re going on live TV in just a few minutes with this guy. You can’t have an erection the size of a goal post when you sit down on the couch.

Eric cleared his throat. “I was a fan of yours, too. Still am,” he said with a raised brow and a half-smile. Fan of your ass. Fan of your mouth. Fan of your cock—or I’m sure I will be once I get my lips around it.

Jesus Christ. His dirty mind was working overtime this afternoon.

“Thanks.” Jordan pulled his hand away a little too quickly. “Nice weather today, huh? I guess Tampa needed a long shower to cool off.”

Eric laughed easily, even as he wondered if that was Jordan’s way of calling him out. Did Jordan know that Eric had spied on him in the shower one afternoon when they’d both stayed late at camp?

Eric had been lucky enough to catch a glimpse of Jordan alone after practice—his stunning body glowing in a shaft of sunlight streaming through the high, dusty windows of the locker room. Every tight, toned, tanned, wet inch—including the increasingly erect inches between his legs—had been on stunning display, making Eric’s body respond with an epic woody of his own. The sight had taken his breath away and fed his fantasies for years.

A flush crept up Jordan’s strong neck. “Yeah. Sure. Showers are good.” 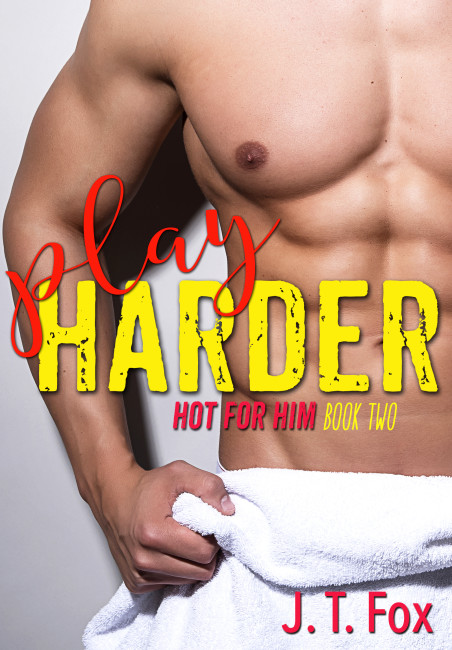 WARNING: This book is 100% hard-riding, dirty-talking alpha times two. Read at your own risk.

Having him is the most dangerous play of all…

Now that Miami star quarterback Jordan Barr has had a hot, wild night with halfback Eric “The Brick” Higgins he can’t get him off his mind. Eric is under his skin, but he needs to learn a lesson—that Jordan calls the shots when it comes to these sorts of red-hot entanglements.

And that lesson will be conducted in bed with every inch of Eric’s ripped, muscular body bared for Jordan’s pleasure.

Jordan is the most intense, commanding lover Eric has ever had. Trouble is, the two of them have an enemy. As rumors of game fixing ratchet up, compromising photos land on their phones, as well as a note to pay up or be exposed. Eric’s ready to walk away, but when the threats intensify, the men must work together to figure out who the hell is gunning for them.

And working together can only lead to one thing…

An even hotter, harder, sexier encounter.

But the more they come together, the more determined their enemies are to tear them apart.

Play Harder is the second installment in a three-part MM romance trilogy that ends in a cliffhanger. 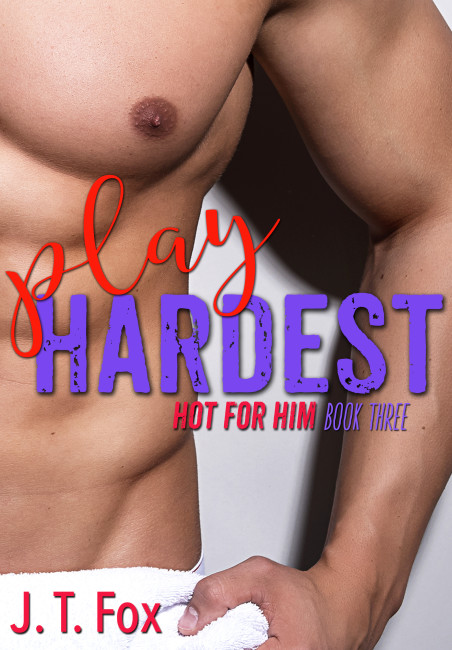 J.T. Fox loves white-hot, sexy stories about men in love (and in lust), rescue dogs, football, soccer, rugby after work, and long, lazy Sunday afternoons with friends. J.T. lives in the south with one alpha pug, two opinionated cats, and a partner who puts up with more than his fair share of crazy.