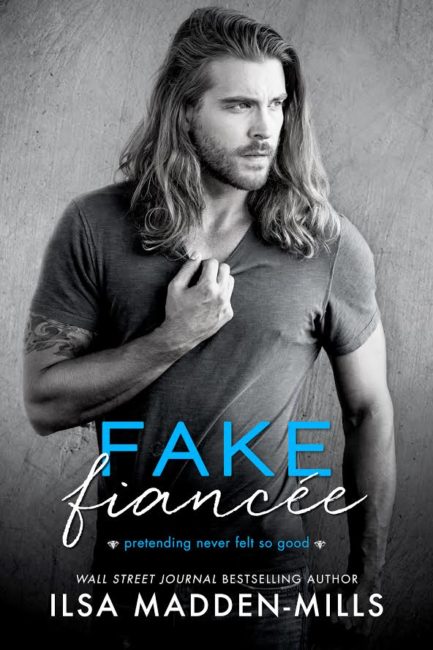 They say nothing compares to your first kiss,

But our first kiss was orchestrated for an audience.

Our second kiss…that one was REAL.

He cradled my face like he was terrified he’d f*ck it up.

He stared into my eyes until the air buzzed.

Soft and slow, full of sighs and little laughs,

He inhaled me like I was the finest Belgian chocolate,

And he’d never get another piece.

A nip of his teeth, his hand at my waist…

And I was lost.

I forgot he was paying me to be his fake fiancée.

I forgot we weren’t REAL.

Our kiss was pure magic, and before you laugh and say those kinds of kisses don’t exist…

Get ready for breathtaking kisses and dreamy football players…

Fake Fiancée is Ilsa Madden Mills’ newest standalone romance. I always know when I pick up one of her books that I’m going to be entertained by the love story, the witty banter, the sexiness, the suspense and the angst. Always the perfect combo! The first time sassy Sunny meets sexy Max Kent, she feels a connection that she’s not prepared for. Little does she know that he feels it too. It’s more than chemistry but neither of them knows what it means. They are both coming off break ups and Max has the great idea to pretend to be dating. It will get his ex and any other girl sniffing around off his back and he can concentrate on the only important thing to him. Winning the Heisman. There’s something different about Sunny and he can’t help but be drawn to her. She’s pretty and sexy, but she’s much more. She’s funny, sassy and tells him exactly what she’s thinking. She’s not after something like all the other girls. Sunny is attracted to Max and her head knows it’s fake and they are pretending, but her body wants him. Badly. Max doesn’t just want Sunny in his bed, he wants to talk with her, hang out with her and get to know her. He doesn’t need a relationship to cloud his goal. But, Sunny gets under his skin and he can’t help fall for her. Where does that leave him now? Can he have both, the real fiancée and the Heisman? Sunny wants it to be real. Will she be able to trust Max? I loved this story and this couple! They have crazy chemistry and hilarious banter. Max is sexy as hell! I honestly wasn’t ready for their story to be over. I want more!

PS. Funniest grandma in the history of the world!

“Yep. Now smile.” I held the phone up for a selfie, licked her on the cheek and snapped the pic. Boom.

“You’ve got that dreamy look on your face. Whatcha thinking about?”

He grinned. “I am pretty damn dreamy.”

Fake Fiancée is a standalone novel by the amazing Ilsa Madden-Mills. I have only read a few of her books but I loved them so much that I didn’t even read the synopsis for for this one. I mean the title and that cover was enough for me to want my greedy hands on it. This is a story about a quarterback and his cookie…

Max Kent is a college football star and on his way to winning the Heisman. And he wanted her. Wanted her to be his fake girlfriend. This was his year and he couldn’t fuck it up. No fights. No groupies. No rumors. This was the perfect plan. Sunny Blaine could be the ticket to the Heisman. She could be the woman on the side of his arm that would keep him calm and keep the groupies from picking his locks. And who doesn’t love a love story? Even if it was a fake one. It had to be. He didn’t have time for distractions. Football is his life. He has to keep his eye on the prize no matter what. But he never expected Sunny to be the sunshine in the darkness. He didn’t expect the woman with a mess of hair, a pissed off attitude, and a body that he wanted to discover would change his life with one knock on his door.

Sunny didn’t want him. Nope. Not one bit. She vowed to stay away from athletes. They were her kryptonite. But when Max Kent kisses you. You feel it all over. And when he comes up with a crazy ass proposal that is a win-win. You take it. But she will not fall for the quarterback. She will cash her check, pretend to love him, watch a few games, and then walk away. How hard could it be? He didn’t really want her anyway. It was all for show. All for the Heisman. I mean, how could someone like him, want someone like me? He is a star football player. I am a plain Jane. We might feel some kind of connection but it’s definitely not a love one. Maybe a friendship one but that’s all it could ever be. Right?

Max and Sunny’s relationship is a complicated one. They feel something but can’t define it. Then of course it’s the “was that a real kiss or a fake one?” thing. But one thing is for sure, they start to feel more comfortable around each other more every day. Sunny has been on her own for years and Max has his team but not really any other family. So it’s nice to have one another to talk to about that part of their lives. Then of course, there is the kissing, hand holding, and protectiveness. It’s a friendship. But could it turn into more or will Sunny cash her check and walk away? Will Max let her go after the season? Was it all fake or was it real and they didn’t realize it? Will the pressure he is feeling ruin him?

Awe…I loved this story. The timing of it was perfect. They are at the age in college where they have to think more about their futures and not just about the next party. Max might be a football star but he is more than that. It shows in the way he carries himself. Not everyone can see it but it’s there. And Sunny…she is a badass with a heart of gold. Together, they are something else. I felt a connection between them from the very start. Their banter is fun. Their chemistry is hot. Their friendship is unexpected. Their story is everything.

Overall…I laughed. I cried. I wanted to slap a bitch. I cheered. And I got hot and bothered. One amazing combo of emotions! I didn’t want it to end.

“We could be the best damn Hallmark movie ever made, Sunny.” My voice was dead serious.

“Hmmm, if I had to pick qualities in a fake boyfriend, I’d want him to be a great spider killer. Are you?”
“They don’t scare me.”
“Even the big hairy ones? There’s one currently residing in my bedroom somewhere.” I grinned.
“Let me come over and I’ll hunt him down.”

“You bloody shocked him into silence.”

Max stalked over to the barrier that divided the stands from the football field and jumped it. The fans went nuts as he brushed past them, some not even realizing it until he was down the aisle. The Jumbotron followed him.

“I don’t know,” I said rather weakly, taking the chance to study him the closer he came. He was beautiful, his shoulders impossibly broad. To add to the distraction, his helmet was in his hand and all that dark brown hair was flowing around his chiseled features as if he had a fan in his face. My Viking.

I stopped breathing . . .right when he came to a halt in front of me and knelt down on one knee.

Eyes the color of a wild ocean gazed at me.

He took my left hand in his right one.

“Max,” I breathed, my heart fluttering.

He gazed up at me. “Sunny Blaine, will you marry me?”

The stadium went wild. In a daze, I looked up at the Jumbotron and felt like I was watching this happen to someone else. Camera phones flashed all around us.

My first clear thought was I’ll kill him.

Aloud, nothing came out but a faint wheeze. Clearly someone had stuffed a giant wad of cotton in my mouth. Clearly I needed something a lot stiffer to drink than this Diet Coke. Clearly my fake boyfriend was a freaking raving lunatic.

He sat his helmet on the ground next to my feet, reached inside it and pulled out a small black box.

The box opened, and my stomach churned at the sight of the large round solitaire diamond ring that was nestled on the black silk. I blinked repeatedly to clear my vision.

With deft fingers, Max eased it out of the lining and slipped it on my left hand.

I stared down at it. Then back at him.

I was going to murder the hottest quarterback in the country.

Kiss her, Kiss her, the crowd chanted.

We were the focal point of the entire world.

Max stood and tugged me up with him until we were standing. He slid his hand around my neck and pulled his face to mine. The sky was blotted out as he kissed me.

But I hadn’t said yes!

Not to a fake engagement.

The applause of the stadium was deafening. And his kiss—it was deadly. Despite my rage, my body craved him. His lips were hot, so hot, and my tongue met his with a vengeance. We kissed hard, and I nipped at him, my teeth scraping across his lips. But the only one who’d end up bleeding in this scenario was me.

He eased back to take me in, and with a final look at my face he gave a thumbs-up sign to the entire stadium. They went nuts, chanting his name.

“I’m sorry,” he whispered in my ear, letting his hand trail down my arm as he stepped back from me. He walked away backward, eyes on me the entire time. The announcers for the game told everyone who might have missed it that Max Kent had just asked his girlfriend to marry him, and she’d said yes. More cheers came as they replayed him on his knee in front of me with a giant YES written across the top.

I plopped back down in my seat. Frozen.

My face went hot. Even my ears burned. I wanted to crawl under a seat.

The half ended and our offense came out to the field, snapped the ball, and Max threw it straight to Tate who ran it in for another touchdown. My chest constricted and anger churned in my gut.

I didn’t care who won.

Most of all, I hated Max Kent, and I was going to make him pay.

She’s addicted to all things fantasy, including unicorns and sword-wielding females. Other fascinations include frothy coffee beverages, dark chocolate, Ian Somerhalder, astronomy (she’s a Gemini), and tattoos. She has a degree in English and a Master’s in Education. When she’s not pecking away on her computer, she shops for cool magnets and fuzzy pajamas.

She loves to hear from readers and fellow authors. Email her at ilsamaddenmills@gmail.com.