1) Having the highest rank in a dominance hierarchy

2) The most powerful man in a group

He was a stranger to me, a dark and dangerous presence who materialized from the shadows one rainy night to save me from a vicious attack. I didn’t know his name or where he was from. All I knew was that the only place I’d ever felt safe was in his arms.

But safety is an illusion.

And not every savior is a hero.

And—as I’d soon find out—having an alpha save your life comes with a price.

Liam Black wanted something from me in return. 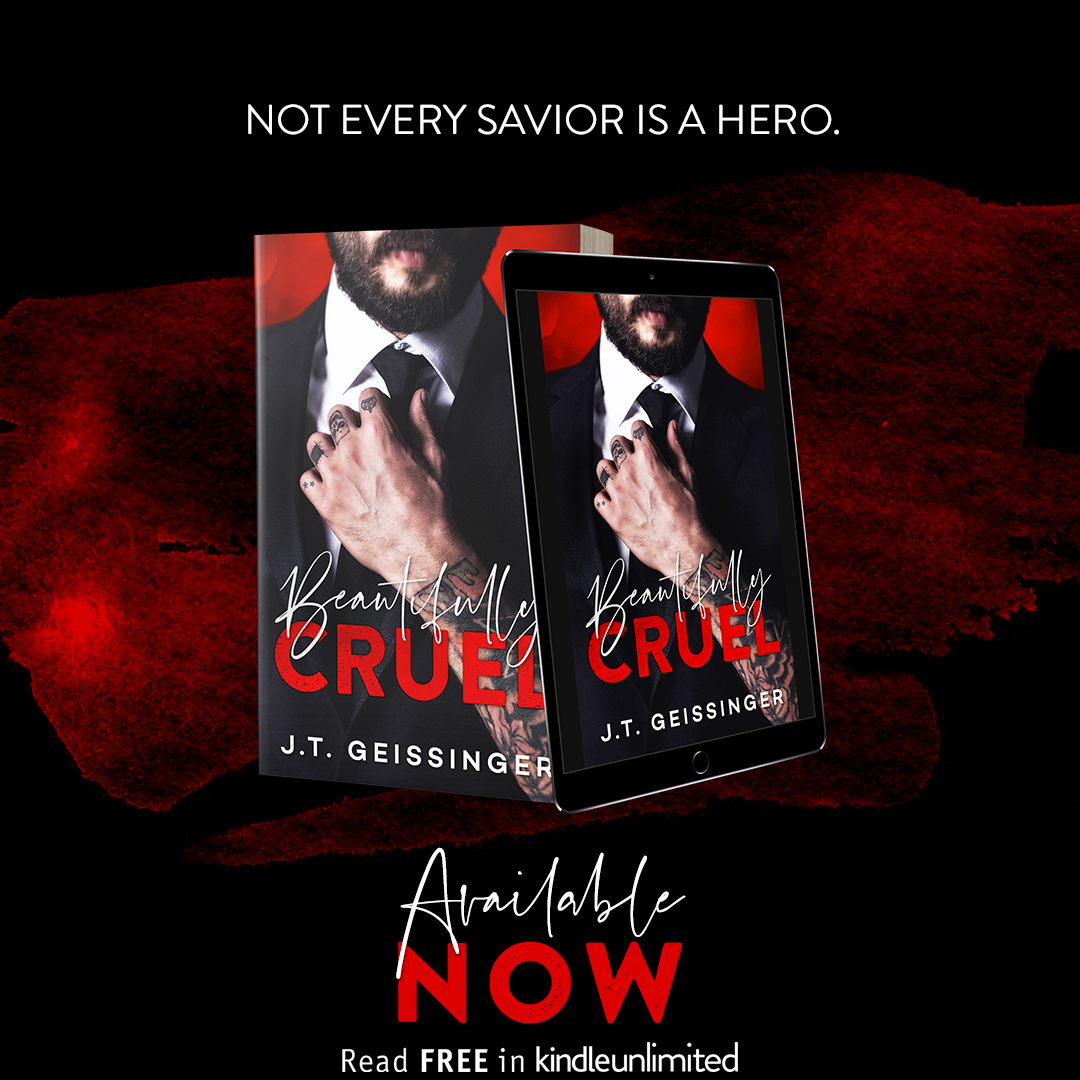 Download your copy today or read FREE in Kindle Unlimited!

Beautifully Cruel is J.T Geissinger’s newest standalone novel. I have read many of J.T’s books and this is definitely one of my favorites! It’s dark, steamy, and mysterious.
Eleven months. It’s been eleven months since Tru first served coffee to the mystery man who the staff of Buddy’s Diner calls Wolf. A man who comes alone after midnight and only orders coffee in her section. He refuses to even sit if she isn’t working. She doesn’t know his name since they never talk but his stare makes her flush. All. Over. Then after a few nights of a few sentences between and especially one scary one, changes everything. Now, she only feels safe in his arms. He wants her there but his life doesn’t have room for relationships. Those can get the ones he cares about killed. But, he needs her. She is different. The moment he saw her he knew that and he knew he should stay away but he couldn’t. He was a man with an addiction. She was his drug.
She didn’t know what was happening. One minute she was outside of the diner and the next she was sitting with him. A man she trusted even without a name. She wasn’t shy around him like she was with other strangers. She was confident, strong, sassy, and not taking any of his shit. And he seems to like it. He told her she should say no to a proposal he had in mind which made her want to say yes. What will happen if she listens to him?
I can’t say shit without spoiling!! Ugh. I can’t say much but I can say that I loved these two. He is alpha but he has layers. They are full of passion, wit, and humor. She is a badass. He definitely met his match when he found her. Together, they discover the unexpected in each other. I loved it!! And did I mention, Liam Black has an accent!? Yum!!!
Overall…the writing is fantastic. It’s full of suspense, passion, laughter, love, and books. The characters are strong and you can feel their connection. Just awesome.
Quotes:
In a low, husky voice, he says, “By the way, lass…my favorite ice cream flavor is pistachio.”
“You don’t have a man, then.” Wow. How he managed to make that sound like, “Bend over the table and lift up your skirt,” I’ll never know. Carla was right: the man is fire.
“You smug son of a bitch,” I say, seething. “Don’t think I won’t shoot you, because I might.”
“Maybe you could let me give you a few more orgasms first, though. Just a thought.”

I stare at him, incredulous. “Are you telling me you think this is a good idea?”

“I don’t know. Maybe nothing.”

His pause is loaded, and I know he’s carefully choosing his words.

“But she was about to get shot—or worse—and she fought back. You saw it yourself. On the ground, outnumbered, beat up, gun in her face, she throws a punch instead of all the other things she could’ve done. Begging for mercy. Giving up. Crying.”

He lets it hang there, knowing I have enough personal memories of men far stronger than she doing exactly that.

“So she’s a fighter,” I say, aggravated, yanking on the knot on my tie because it suddenly feels like a noose. “That doesn’t make it right.”

“Aye,” he agrees, nodding. “But maybe it makes it a little less wrong.”

I glare out the window, muttering a curse. I can’t believe he’s saying this. Him, of all people. I expected him to be silently seething with disapproval, not taking her side.

“You’ve been alone a long time, Liam. If you were careful—”

My temper breaks. I glare at him and thunder, “I won’t risk her life!”

Declan’s expression doesn’t change. His grip stays loose on the steering wheel, his gaze doesn’t dart away in panic. He simply meets my eyes in the mirror and tells me a devastating truth.

I grit my teeth and look out the window, hating that he’s right. Hating myself for letting it get this far.

I had a chance, when all I was doing was memorizing her profile while she poured me bad coffee. Before I knew the particular way she falls asleep. What her skin smells like after a shower. How her body feels pressed against mine.

How deeply satisfying it feels to protect her.

As if it were the thing I was born to do.

But I can’t undo what I’ve done. I can’t go back to that first day I saw her eleven months ago, helping an old woman cross a busy boulevard, stopping traffic by holding up her hand as the light turned from red to green. I can’t unfeel what I felt when she glanced up and our eyes met through the windshield for a moment before she turned her attention back to the old woman doddering by her side.

She was beautiful, but I’ve seen a thousand beautiful girls.

Never one who looked so fierce, though.

With her jaw set and her mouth pinched and her brows drawn together, she looked like she’d rip the head off anyone who dared to honk his horn at the painfully slow progress she and her elderly friend were making.

She was a lioness. Even without opening her mouth, I heard her roar.

So yes, it was simple curiosity that made me tell Declan to pull over. Yes, it was on a whim that I watched her wave goodbye to the old woman when they reached the other side of the street. Yes, I fully admit it was foolish of me to follow her into Buddy’s Diner, and to sit in her section that first time.

But it was sheer stupidity that I kept coming back.

As long as I was out of the country, I could tell myself I wouldn’t see her again. I thought I had the strength to stay away. But as soon as I returned, the wanting rushed back. The pull to see those clear green eyes. The need to hear that lilting voice and see that shy smile and be near her, if only for a moment.

Now, because I indulged myself, I’m well and truly fucked.

Because need and want have turned into something more powerful. Something darker and far more perilous, for us both.

So now I have two options.

Option one: claim her.

Option two: give her up.

I can’t bring myself to do either.

J.T. Geissinger is a #1 internationally bestselling author of emotionally charged romance and women’s fiction. Ranging from funny, feisty romcoms to intense, edgy suspense, her books have sold millions of copies and been translated into several languages, including German, Hebrew, French, Czech, and Japanese. The film & TV rights to her Night Prowler series have been optioned by the BAFTA-winning studio that created VFX for movies such as Avatar, X-Men, and The Avengers.

She is a three-time finalist in both contemporary and paranormal romance for the RITA® Award, the highest distinction in romance fiction from the Romance Writers of America®. She is also a recipient of the Prism Award for Best First Book and the Golden Quill Award for Best Paranormal/Urban Fantasy.

She’s a Southern California native currently living in Nevada with her husband and rescue kitty, Zoe.