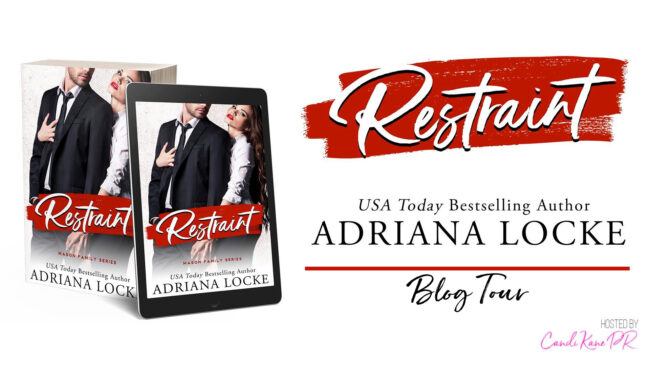 MAKE SURE YOU CHECK OUT ALL OF ADRIANA’S GIVEAWAYS!
$10 Amazon Gift Cards Giveaway (5 winners):
https://geni.us/l75lzm

Join Adriana’s Facebook group for a week of fun:
https://geni.us/BBAL

Restraint is the first book in the Mason Family series by the very talented, Adriana Locke. I read Restraint as a short story in the back of her book, Cross two years ago and I wanted more!! When Adriana announced she was giving us just that I was so excited and for it to be the start of a new series, I was super excited. She did a fantastic job of connecting the families together.

It was supposed to be a one-night stand. It was also supposed to be just a three-day vacation forced upon Blaine but her overbearing brothers who know her well. She is a workaholic who needed a much needed break. She had no idea that the vacation was going to change her life. It all started in an airport…

Holt was late but he didn’t give one fuck once he saw her. She was beautiful, smart, and witty and he wanted her. He wanted to take her to dinner and then have her for dessert, but he was shot down. He didn’t even get her name. That was until fate stepped in and he saw his mystery woman a few hours later. He wasn’t going to let her go without a fight. Luckily, she gave in and they had one hot night together. He didn’t want just a one night stand. She was not a one-night stand type of woman. And when fate stepped in again, it gave him an idea. One week. That’s it. It was perfect. They were both too busy for more. One thousand miles apart.

One week. It’s a week of all kinds of ups and downs. What will happen when their time was up?

This was so worth the wait!! I love these two. Their banter. Their independence. Their connection. Their families. I love Adriana’s family series’. They are so much fun and I can’t wait for the next book. All these brothers are have different personalities and ways of life. It’s going to kick ass.

“That’s not what I meant,” she says, her hand waving toward her pinked cheeks.

I grin. “By the way you’re fanning your face, I think that’s exactly what you meant.”

“You most certainly will come after me,” I say with a raised brow.

Restraint is the first book in the Mason Family series by the fabulous Adriana Locke. I love when one of my favorite authors starts a new series. It’s just makes me giddy! Even better when they do a little spin-off from a series I adored! This is Blaire Gibson’s (Yes, that Gibson!) story with the sexy Holt Mason. Holt wanted her as soon as he saw her. There was just something about her that pushed all his buttons. One night just wasn’t enough. Now he’s got her for a week and he’s going to spend as much time with her as he can. Blaire is on vacation, something that’s odd for her. She’s a dedicated, workaholic who doesn’t have time for vacations or friends or much of anything. Holt’s showing her that it’s ok to open up to him. Share things about herself and her life. It doesn’t make her weak, just makes her human. Holt doesn’t understand why he wants to get to know her, but he knows it’s something he has to do. He’s never met anyone like her and he isn’t ready to let her go. Can they still do their jobs and be with each other? Could it be that easy? Oh man! I love Holt and Blaire! They are total equals so they understand what it’s like to work all the time. But Holt shows Blaire how to relax and just be. And Blaire shows Holt what it feels like to be loved. When you stop to listen to your heart instead of your head, you just might get everything you’ve ever wanted! Bring on Holt’s brothers!

Blurb:
Blaire Gibson knows better than to have one-night stands.

She prides herself on her decision-making skills. It’s the one asset that has never let her down. But even the best thinkers have weaknesses. Hers is a delicious business mogul with a quick tongue. Unfortunately for her, that tongue is good for more than just talking.

Holt Mason doesn’t need to justify anything to anyone.

He wants Blaire. He pursues Blaire. And he gets Blaire because that’s how his life works.

What begins as a single night in a hotel room spirals into an unusual agreement. As late nights provide the space to trade secrets and walls come tumbling down, more is shared than just pillow talk.

They both should’ve known better. They should’ve shown restraint. Because when guards are dropped, hearts get hurt.

About the Author:
USA Today and Washington Post bestselling author Adriana Locke lives and breathes books. After years of slightly obsessive relationships with the flawed bad boys created by other authors, Adriana has created her own.

She resides in the Midwest with her husband, sons, and two dogs. She spends a large amount of time playing with her kids, drinking coffee, and cooking. You can find her outside if the weather’s nice and there’s always a piece of candy in her pocket.