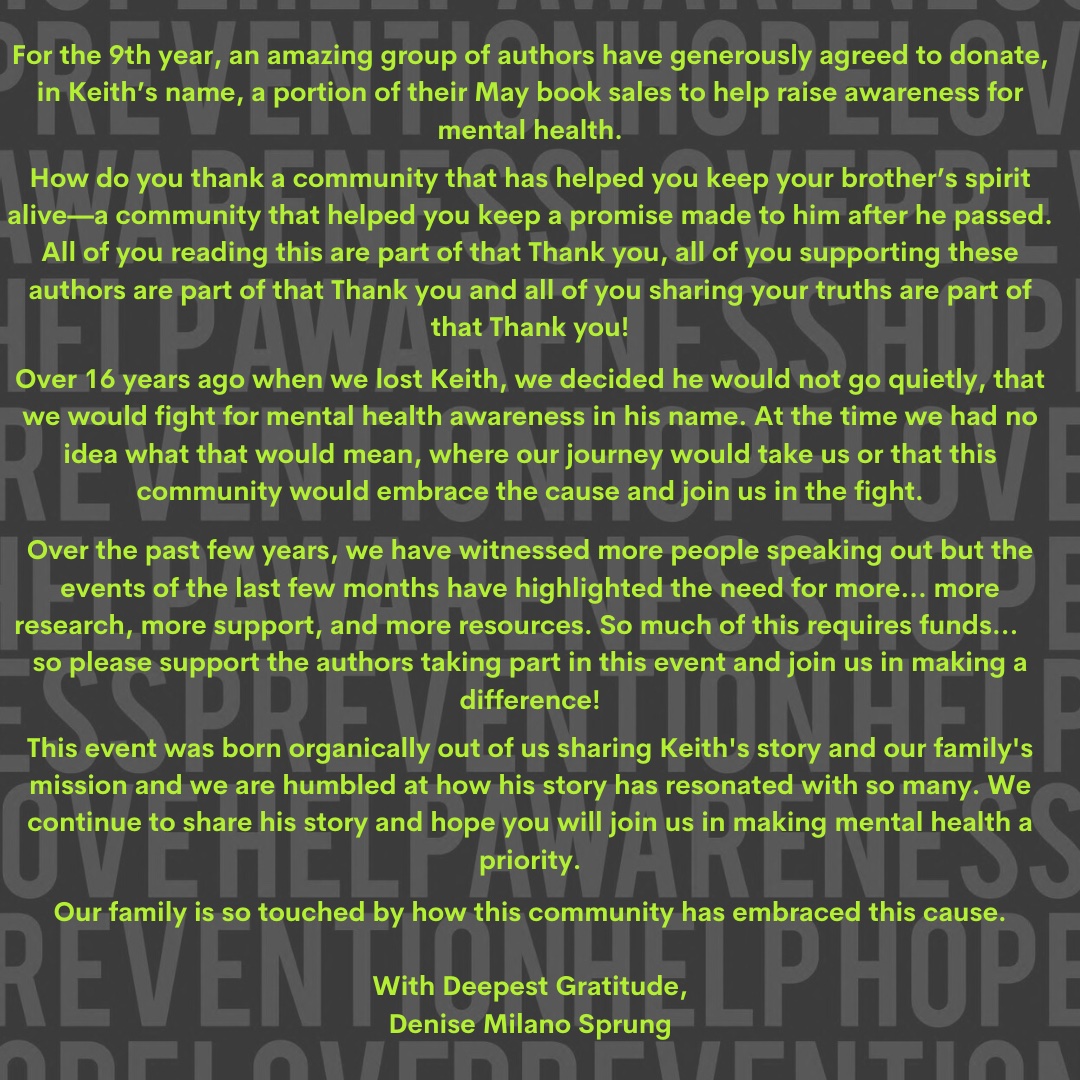 📘 Purchase a book from the amazing books listed below! We hope you will #1click4charity a number of these amazing books! The portion of sales is from ANY platform: digital, print, and audio.

📘 If you have read one of the wonderful stories included, gift a copy to a friend who might love it!

📘 Share the image below or any of the custom photos the participating authors share on social media to raise awareness and to show your support.

📘 In this digital age, COMMENTS are currency so as you see these images PLEASE Comment

📘 Make a tax-deductible donation directly to the Keith Milano Memorial Fund at AFSP. 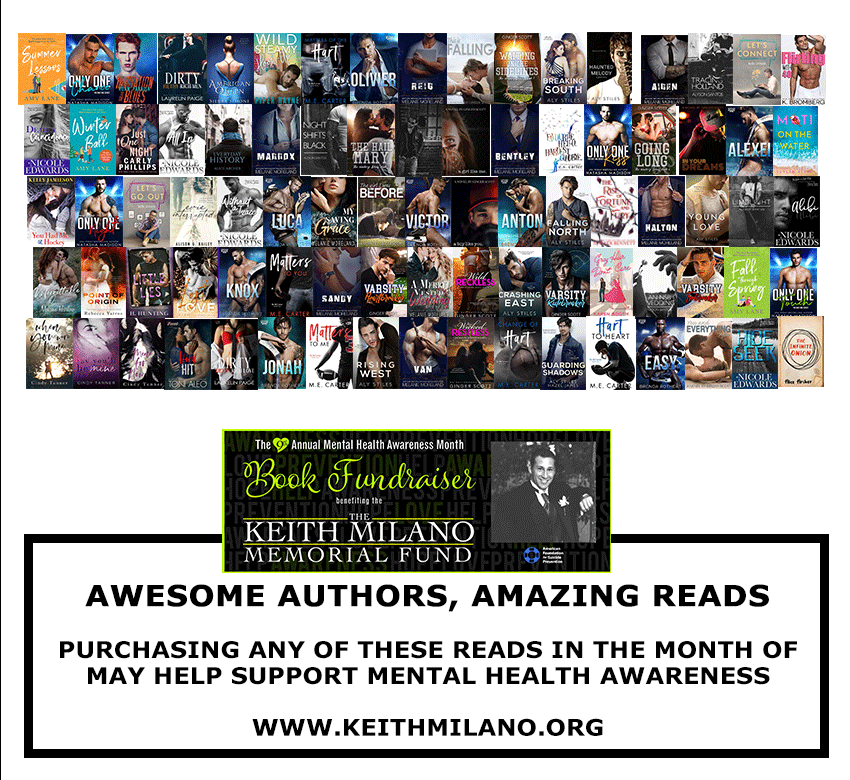 Watch to learn more about the Milano Sprung Family’s mission 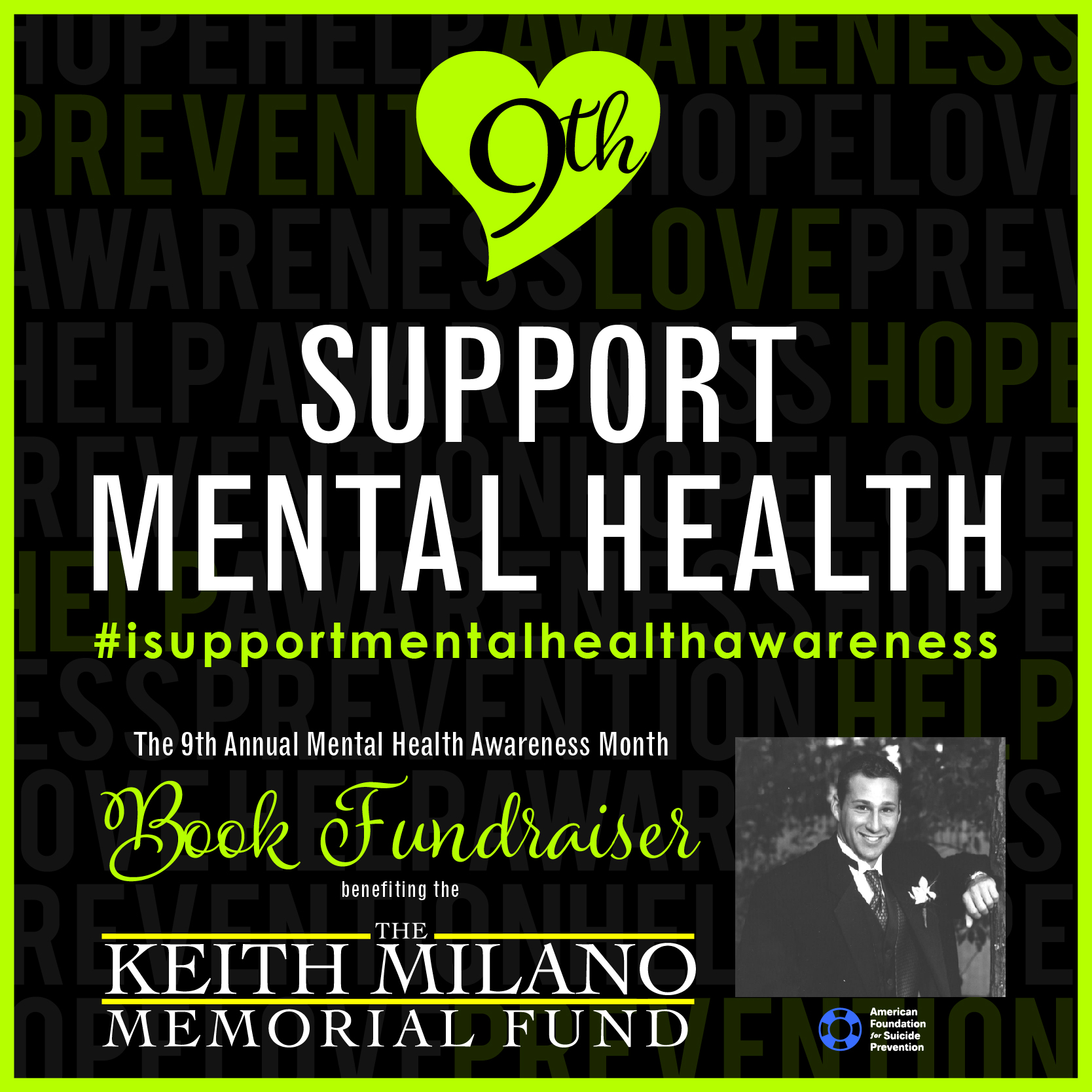 The Keith Milano Memorial Fund was established to help raise awareness about the devastating and deadly disease that is mental illness. Keith’s spirit and laughter are kept alive through our efforts to increase awareness about mental illness and to raise money for education and imperative research. Keith often struggled with society’s perception of mental illness. Our hope is that by having the strength to say that Keith was “Bipolar” we can strip away the stigma and help others to be more open about their disease.

Watch to learn more about the Milano Sprung Family’s mission

AFSP is the only national not-for-profit organization exclusively dedicated to understanding and preventing suicide through research and education, and to reaching out to people with mood disorders and those affected by suicide. AFSP is a fully accredited 501(c)(3) tax-exempt organization incorporated in the state of Delaware with primary offices in New York City. Federal tax ID # is 13-3393329.

Reel, Kennedy Ryan’s new breathtaking standalone romance set in the glamorous world of film and theater, is coming June 8th, and we have the beautiful cover and your first look!

One moment in the spotlight.

For months I stood by, an understudy waiting in the wings, preparing for my time to shine. I never imagined he would watch in the audience that night. Canon Holt. Famous film director. Fascinating. Talented. Fine. Before I could catch my breath, everything changed. I went from backstage Broadway to center stage Hollywood. From being unknown, to my name, Neevah Saint, on everyone’s lips. Canon casts me in a star-studded Harlem Renaissance biopic, catapulting me into another stratosphere.

But stars shine brightest in the dead of night. Forbidden attraction, scandal and circumstances beyond my control jeopardize my dream. Could this one shot—the role of a lifetime, the love of a lifetime—cost me everything?

Keep reading for the very first excerpt from Reel!

A USA Today and Wall Street Journal bestselling author, Kennedy Ryan and her writings have been featured in Chicken Soup for the Soul, USA Today, Entertainment Weekly, Glamour, Cosmo, TIME, O Mag and many others. A RITA® Award winner, Kennedy writes empowered women from all walks of life and centers those who have found themselves perennially on the margins of traditional storytelling.

Her Hoops Series (Long Shot, Block Shot and Hook Shot) and All the King’s Men Series (The Kingmaker, The Rebel King and Queen Move) have been optioned for television.

An autism mom, Kennedy co-founded LIFT 4 Autism, an annual charitable initiative, and has appeared on Headline News, Montel Williams, NPR and other media outlets as an advocate for autism families. She is a wife to her lifetime lover and mother to an extraordinary son.

The first time I saw her was across the room at a bar. I had no idea at the time that she was only sixteen. All I knew was that she was beautiful, she was sending me do-me vibes from across the room, and I was fresh off a deployment where there’d been nobody but men for nine of the longest months of my life.

The second time that I saw her was at a court hearing that would decide how long I’d be sent to prison for. She was a cute little curly-haired blonde with wide, expressive eyes, a banging body, and the reason that I’d gone to prison in the first place.

The third time I saw her was through a glass divider of the prison visitation room as she waited for her stepfather, my lawyer, to tell me how sorry he was that he lost my case. Especially when I’d been the one to kill the man that was about to kill his daughter.

The last time, the time that I decided enough was enough, was when I saw her at my bar eight weeks after I’d been set free.

Unlucky for her, I’d stopped being a good guy about two seconds after those bars closed behind me twelve years ago. Now all that was left was a shell of a man that didn’t see the good in anything. Anything except for her.

Jailbait is the third book in the Souls Chapel Revenants MC series by Lani Lynn Vale. I’m loving this series full of sexy men who all went to prison for saving someone. Trick met Swayze when she was just sixteen and he fell hard for her. He saved her and went to prison for it, but got out early to help the mayor. He didn’t expect to see Swayze waltz into his bar, but her she is. Older, more gorgeous and living across the street from him. This isn’t going to be good. He thinks he hates her, but he really doesn’t. He doesn’t blame her for his actions and he can’t seem to stay away from her. Swayze is hilarious, independent and can’t stop feeling guilty. They try to stay away from each other but it’s no use, they are just destined to be together. When danger keeps showing up, Swayze is in trouble again and Trick is going to do whatever it takes to save her again. This time he’s going to be smart about it and he has his team to help. I loved Trick and his attitude and sexiness. Swayze cracked me up and together they made me swoon and cry! Already looking forward to the next one!