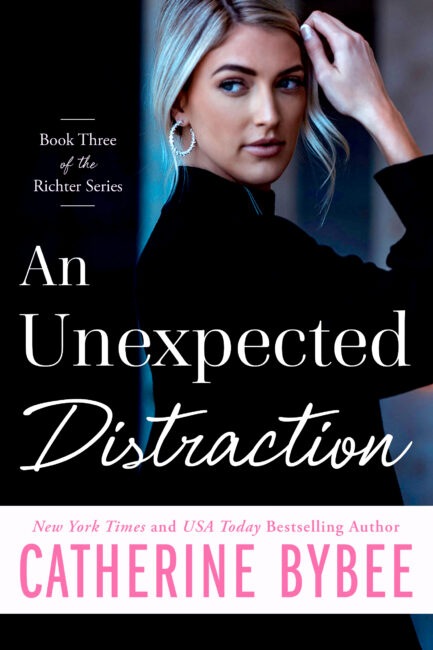 Jacqueline “Jax” Simon knows how to expose secrets: she’s a skilled operative with MacBain Security and Solutions. When Jax hears her parents are divorcing, she races to London to find out why. She’s determined to learn the truth, especially when her investigation uncovers why her parents sent her to Richter, the German military school that made her a fighter.

Andrew Craig collects Jax at Heathrow Airport as a favor. He’s heard she’s a handful, but he didn’t know she’s dangerously gorgeous too. His instant attraction could change his life…or end it.

Jax doesn’t want to fall for Andrew, but soon he’s worming his way into her life. Together, they infiltrate Richter to discover if it has returned to its covert purpose: training children to be spies and assassins and blackmailing parents to look the other way. As the attraction between the two intensifies, so do the secrets exploding all around them. How deadly are those secrets—and who will survive?

An Unexpected Distraction is the third book in the Richter series by Catherine Bybee. I’ve been waiting for Jax’s story and it was everything I wanted it to be and more. She’s such a great character. Fun, loyal, and kicks major butt. When she’s called home for a family emergency, the driver who picks her up is actually her brother’s friend, Andrew, but she doesn’t know that. There’s an instant attraction and he seems like someone she can spend time with while she’s back in London. But when something leads them back to Richter and she gets closer to Andrew, it seems she might not be running back to LA anytime soon. Andrew never thought he’d fall for his friend’s sister. It was just a favor that changed his life. He didn’t realize how dangerous her job is, but he not put off by it. Even when the danger hits very close to home. Jax knows something more is going on with her parents and she gets to see a different side of her mom and I loved their relationship! I loved seeing Jax with her family, her friends and of course Andrew. It was also great seeing Neil, Gwen, Claire, Cooper and the others. I’ve missed them all! I loved Jax and Andrew’s story! It’s fun, action packed, a little sexy and heartwarming. Hoping to see more from these characters again!

She placed a finger to her lips, a silent signal to stay quiet, and nodded toward the bathrooms. Without checking to see if he would follow, she turned away so that all Harry or her dad would see was her back if they looked.

“Good to see you again,” Jax heard him say before she turned to look at him.

“Imagine my surprise to see the cabbie drinking with my family.”

His eyes widened along with his smile. “That was your assumption.”

“That you didn’t correct.”

He rolled his eyes. “Technicality.”

He opened his mouth and she stopped him. “I’d avoid any technical lies this time around.” She glanced at her watch. “In about thirty minutes I’ll know just about everything there is to know about you down to your last credit card transaction. Choose your words wisely.”

Andrew shifted from one foot to the other, arms folded over his chest. “Harry, my friend, asked me to pick up his handful baby sister at the airport and then watch over her to make sure she didn’t show up unexpectedly at his flat and stumble on her father before he could talk to her.”

She tried to find a weakness in his story. “Oh.”

“Yeah, oh!” He moved aside so someone could walk past to the toilets. “Now, what are you doing here?”

“I went to Harry’s, but you guys were leaving.”

He took her elbow and moved her to the side as more people shoved past them. “Your confrontation will have to wait.”

“He thinks I showed up to ask my friend to join me here.”

Andrew looked at the ceiling. “A harmless beer or two.”

There was more to his story than that. “I’ll be sure and keep up the ruse.” She moved toward the bar.

“I’m going to find out what’s going on with my parents, with or without them telling me.”

Her comment was met with a short laugh. “You passed out.”

“And woke up without pants on.” They made their way to her brother and dad, dodging other patrons en route.

“I thought you’d sleep better. I didn’t do any—”

“I didn’t say you did.” She stopped walking and turned to look at him. “Just don’t expect another peep show.”

Catherine is a #1 Wall Street Journal, Amazon, and Indie Reader bestselling author. In addition, her books have also
graced The New York Times and USA Today bestsellers lists. In total she has written thirty-six beloved books that
have collectively sold more than 10 million copies and have been translated into more than twenty languages.
Raised in Washington State, Bybee moved to Southern California in the hope of becoming a movie star. After growing
bored with waiting tables, she returned to school and became a registered nurse, spending most of her career in urban
emergency rooms. She now writes full time and has penned the Not Quite series, The Weekday Brides series, the Most
Likely To series, and the First Wives series. Learn more about Catherine and her books at www.catherinebybee.com

« Release Blitz & Review – Change With Me, Kristen Proby
Release Day & Review – If Only in My Dreams, Carrie Aarons »