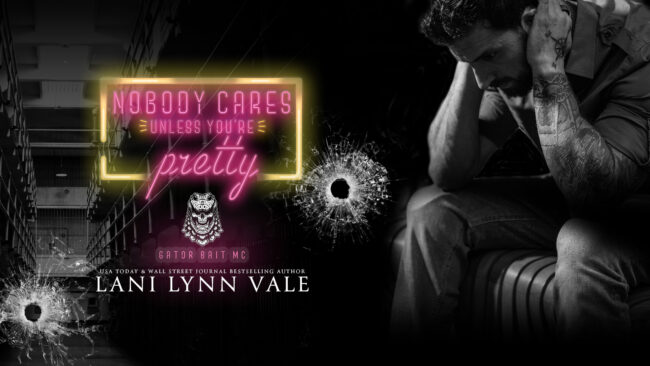 NOBODY CARES UNLESS YOU’RE PRETTY by Lani Lynn Vale is OUT NOW!!!
The problem with Wake was that he was understandable. He was the type of villain that literally scared the absolute shit out of you because you knew that under the right circumstances, you could end up exactly like him.

Which, sadly, was the case for me.

I’d done the exact same thing as Wake, and now I was a murderer just like him.

Did I know that I did wrong? Hell yes.

Did I regret that? Hell no.

Did I plan on changing a thing? Also, no.

Was I falling in love with a man that should scare the shit out of me? A resounding hell yes. 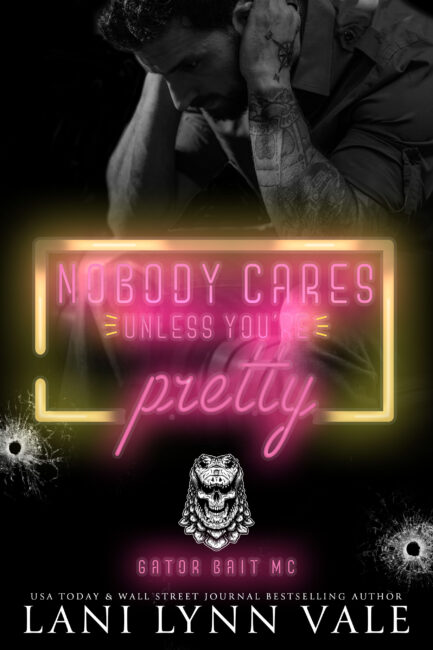 Nobody Cared Unless You’re Pretty is the first book in the Gator Bait MC series. I was downright giddy when I heard Wake was getting his own story! We met both Wake and Dutch in Never Trust the Living and now they are starting a whole new spin off series! Wake is about to be released from jail. Dutch is a psychologist. She seeks him out in prison to ask for help. Now that he’s out he’s going to find her. He knew he wanted her the minute he saw her. All red hair and curves. Now he just has to convince her to take a chance on him. It’s not going to take all that much! Dutch wants Wake desperately but she wasn’t prepared for how fast things started to move. One night turns into more, turns into something very permanent. Now she’s getting to know his daughter and his sister and being brought into his family. They are stronger together and they need to be to deal with the sheriff. He’s trying to catch Wake and send him back to prison, but that isn’t going to happen. Wake and Dutch are so fun and hot and sexy together! I love how smart and independent she is and how laid back and fierce he is! It’s the perfect start to a new series!