Say It Ain’t So 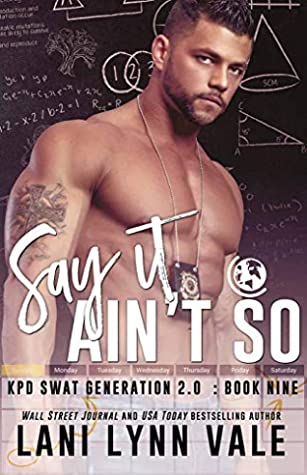 He should’ve never left his house. He should’ve stayed at home. He has a legitimate excuse—he’s running a fever and he’s fairly sure he’s developing pneumonia. He should have called in sick…but he doesn’t.

He goes to work, because his team is relying on him.

First, he has to sign about eight thousand calendars—all from women who purchased said calendars to benefit the Fallen Officer fundraiser. And when he’s done with that, he has to endure a television interview along with the rest of the SWAT team seeing as they made national news with their ‘Hot SWAT’ calendar that’s sold a million copies to women all over the world.

Needless to say, when Samuel Adams walks into the pharmacy hours later, he only has one thing on his mind. Ibuprofen.

Sadly, he never gets to the Ibuprofen. Mostly because before he gets there, he finds a junkie waving a gun around threatening to kill anybody that moves.

He’s running a fever. That has to be the reason that the girl in the corner begins cursing up a storm and drawing the junkie’s attention. Has to be.

And, of course, that’s when the curse words start flying.

The more nervous she gets, the worse her Tourette’s becomes. Which is, of course, why she stands up and gives the man a perfect target.

Thank God that the coughing giant in the corner makes the same move and saves her life.

And how does she repay him? By calling him every awful word in the dictionary.

Say It Ain’t So is the ninth book in the SWAT Generation 2.0 series by Lani Lynn Vale. This is Samuel Adams Spurlock’s story! His parents are Mercy and Miller and I love them! Samuel is so sick and just wants meds to make himself feel better. He stumbles on a robbery gone wrong and meets Hastings, a sexy woman who got caught up in the robbery. Sammy likes everything about her from the moment he sees her. Turns out, she’s the building manager in his complex and when he sees her again, he knows he wants more. Hastings hasn’t had a good track record with men. She has Tourette’s and some people just can’t handle it. Sammy doesn’t even care and that makes him so much more appealing. They have to overcome some obstacles. Missed text messages, Hastings leaving town for a month. Communication problems. But when they figure it all out, it’s on! They are sexy, sweet and perfect for each other. He’s SWAT, she’s a romance writer. He’s her new book boyfriend inspiration and he’s all too happy to help! I thought Lani did a great job writing about Tourette’s. Showing it’s not what most people think and people really do live with it every day. She also threw in some extra suspense in this one and my heart is not ok. NOT OK! I’m still feeling it and I’m not altogether ok with the way things went down. It does show the strength of Sammy, Hastings and the people around them. But, it broke my heart a little. Overall, I laughed, cried, smiled, cringed, cried a lot more and really did love it.

She was a tricky one. I’d never met someone like her before. She was like one of those stuffed donuts. She loked all innocent and shit on the outside, but inside, she was a surprise.

Drink some water, you beautiful and capable dehydrated bitch. ~ Sammy to Hastings

Would you look at the time. It’s fuck this shit o’clock. ~ Hastings’ secret thoughts.