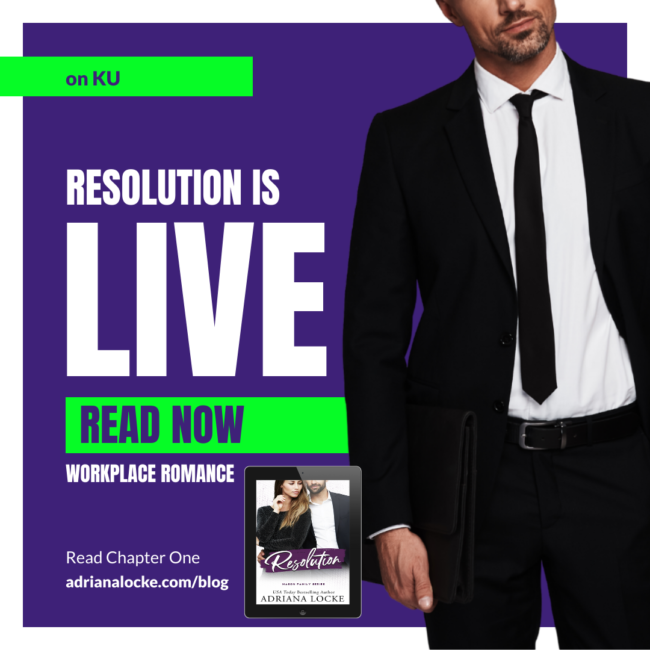 From USA Today Bestselling author Adriana Locke comes a workplace romance between a grumpy, alpha architect and his new client—who just so happens to have the blueprint to bring him to his knees.

Romance is not in Wade Mason’s portfolio.
This is tragic. It’s unfair that a man so maddeningly gorgeous—an architect with a deliciously squarish jaw, adorably dimpled chin, and the hottest black glasses that straddle the line between professional and provocative—rebukes all things love.
I knew this well before I walked into his office.
The man is a conundrum—a complicated, steel-wall of a puzzle. On one hand, he brushes against me in the conference room with a broodiness that sets me on fire. He demands in-person meetings nearly every day about the house we’re working on together. I catch him watching me out of the corner of his eye with a look that’s anything but platonic. But any talk of hook-ups, love, or relationships—even in general? Completely off the table.
I’m determined to peel back his layers until I get to the bottom of the mysterious businessman. But my plan is foiled by a surprise that leaves both of us reeling. Neither of us see it coming but it changes everything … forever. 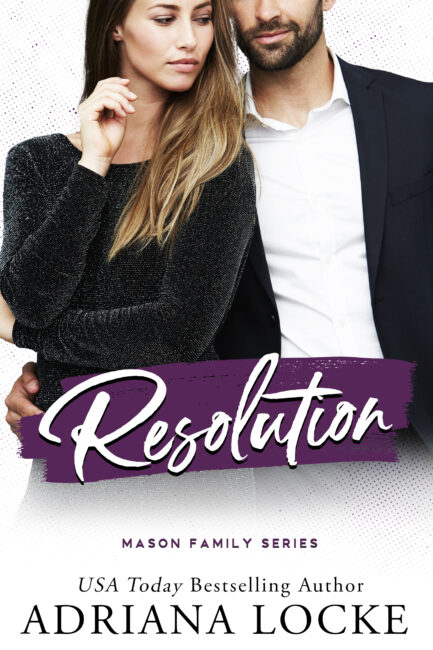 Resolution is the fifth book in the Mason Family series by Adriana Locke. I’ve been waiting for Wade (my favorite Mason) and he was everything I wanted him to be and more. I knew it was going to take a strong, sassy woman to bring him to his knees. We’ve gotten to know a little about Wade over the series and there was just something about him that called to me. The brooding, sexy, suit wearing, bespectacled architect, pulled at something inside me. He’s a total jerk. He actively tries to get out of seeing his family and he’s honest to a fault. But the people who know him best are never swayed by his harshness. They know he loves them. They know he’ll always be there for them, but he won’t do so without a little attitude. When he meets Dara, a new client, somehow he knows his life will never be the same. He puts up his strongest walls, makes the most nonchalant face he can muster, but Dara is not deterred. She even hugs him (gasp!) Turns out they knew each other in college and she might have had a little crush. Dara doesn’t buy into Wade’s “I hate everyone” schtick. She’s going to sass him right into a heartfelt smile if it kills her. But whoa! She wasn’t expecting that smile. She’s totally done for. They both tried to pretend they were only friends, but once Wade decides he has to have her, all bets are off. One taste and nothing will ever be the same. Dara even fits with his crazy family. The only one who doesn’t instantly love her is Rosie, because Wade is hers. Wade and Dara are a perfect fit. She softens his edges. Gives him a reason to breathe and allows him to be himself. She calls him on his crap but also shares her heart with him. It’s a beautiful love story full of lust, banter, family, friends, loss and pain. And I loved every minute of it. Wade is one of my all-time favorite characters of Adriana’s and he lived up to everything I imagined he would be. Dara is the perfect heroine. She’s strong, smart, talented, sassy and stands up for herself. Together they made me laugh, cry and swoon!

Resolution is the fifth book in the Mason Family series by Adriana Locke. You can read each book as standalone but I HIGHLY recommend reading the series since I fell for all of them! Lol. They all have different personalities and family is everything to them. I have been waiting for Wade to get knocked on his ass with love and it was so worth the wait.

Wade doesn’t do relationships, one-night stands or even flings. He is all about work and seeing his family when he has to. And when gets stuck with a new client who could help the business, he isn’t happy. Building a dream home for a rich man’s granddaughter who is probably a diva isn’t in his plans. He is not here for it. Period. And when he meets her… He knows he is f*cked. She is bubbly, sassy, beautiful and familiar. She has a wicked tongue and he one-hundred percent doesn’t want to work with her. Until she throws out the bait…

Dara thought he was an ass before and now she knows he is one but damn…he is her catnip. His dry humor gets her going and when she catches his smirk, she is done. He hides behind his suits, confidence, and sinfully sexy glasses but she knows there is more to him. He is a vault she wants to break open. She doesn’t want to push him but he definitely needs a nudge. Nothing wrong with a little flirting, right? She has to know what makes him tick… And when she does, its explosive!

I absolutely adored this story! I was invested from beginning to end. Dara is hilarious, badass, and sweet, and I just want to be her friend. Wade may seem so stiff but no. His quick wit is so much fun. He definitely has layers to him and I love him so much. Together, these two have the best banter. They so met their match in each other. I loved catching up with the family.

Overall… I laughed. I swooned. I cried. I got hot and bothered. And I was shook!  It’s one of, if not my favorite in the series. I can’t wait for what Adriana has planned for her next books!

“He had on these black pants that hugged his ass.” I shiver. “A crisp white button-down shirt with the cuffs rolled up to his elbows.”

“That’s it. Now I’m screwed too.” Rusti shakes her head, her blue eyes shining with humor. “If you tell me that he had a tattoo peeking out of that shirt, I’ll fight you for him.”

“Your gramps was so sweet. Your mom is so kind. Larissa was a doll. The only person who hasn’t been nice to me is Rosie because she thinks I’m trying to steal her man.”

“Wade Mason,” I say, my cheeks flushing. I smack him gently on the chest. “Are you being sweet?”