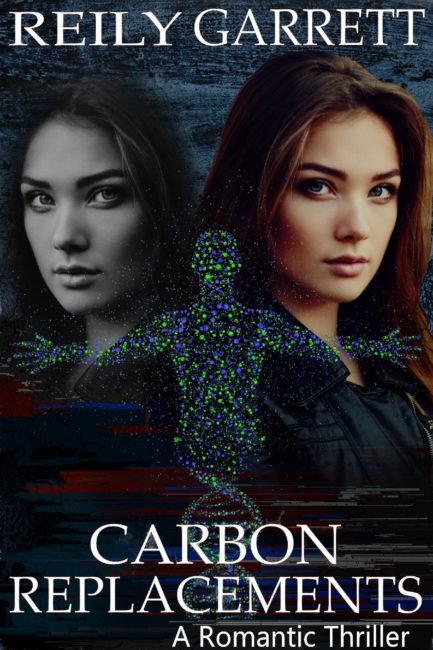 The killer held a knife to her throat—the ultimate decision locked within a dark and deviant gaze.

Determined and dedicated, forensic pathologist Remie Tallin validates her talent by detailing a victim’s last moments of life. Returning to Portland signified her new beginning where a psychopathic stalker designates her a pawn in a seductive game of intrigue.

The lines between predator and prey blur in hunting a medical genius bent on resetting the laws of nature. Evidence has never failed to point Remie in the right direction, yet conflicting discoveries mock the legal system and defy the scientific arena for clarification.

Detective McAllister’s return from leave includes a new assignment along with a partner well versed in subtle sarcasm and innuendos. Discovering the new medical examiner unconscious at the scene of a grisly murder forces him to unite with his brothers against a world of chaos where reality shifts according to a psychopath’s desire.

Carbon Replacements is the fourth book in the McAllister Justice series By Reily Garrett. You can read it as a standalone novel but I do recommend reading the series to get to know the secondary characters. I have been following the series from the beginning and always amazed at how much research has to go into writing it. So much.
Remi recently moved back to town after being away for school and for the beginning of her career as a Medical Examiner. She enjoyed her time away but it was time to come back to her roots. To the family ranch. Her parents have passed but she needed the fresh start. She was only home and working for a few weeks before she was in a horrible car accident. Then a week later, her life was at risk. From a killer. One that knew her by name. She didn’t see his face but clues have taken her to a twisted place.
Billy McAllister was the one who found her. And now he vowed to protect her. Even when she didn’t want him around and she wasn’t afraid to express it. She is definitely a feisty one. That was something Billy liked about her. Along with her smarts, independence, and compassion. But, it wasn’t the time to start something. They needed to find the person who is after her. And to do that, they needed reinforcements. They needed the McAllisters and their better halves.
I don’t want to get too much into the story. I don’t want to spoil anything. I will say that I had to know what was going to happen next. I don’t read many thrillers so it’s a nice change of pace once in awhile and I can always count on Reily for my fix. The writing is intelligent, witty, and fascinating. The relationship between the brothers is awesome. The woman even more so. Dirty birds.
Overall…it’s a crazy ride. I loved trying to figure out who the killer. Putting the pieces together is exciting. The romance part is there but not the center of the book. But it’s there and you can feel it. I have the next book on my iPad ready to go! I know it’s going to be awesome. Those two are hilarious.
Quotes:
“I’d intended to make this painless tonight, but since you ran, the deal’s off.”
“I think he’s hitting on our sister, dude.” More than one way to skin a cat.
“If you knew what I was thinking, you’d be screaming with your first orgasm of the night.”

“Wendy, I’m t-tellin’ you, the man’s a serial killer. He has the body of a Greek God, but his mind is full of squirming maggots.” Gena stifled a sob with a shaking hand, her body wedging back against the driver’s door after twisting to face her roommate beside her. “He’s more depraved than any fucker we’ve ever crossed, and he’s going to find me.” Aftereffects of the adrenaline rush magnified tremors in her fingers and lips while increasingly shallow breaths expelled carbon dioxide faster than her body could produce it. No doubt, the by-products of dizziness, cramps, and weakness crept into her awareness. Fear-sweat on her forehead glistened from distant flashes of lightning.

“Hey, slow down. Take a deep breath. You’re new to this and easily spooked. Just because men are pigs doesn’t mean they’re murderers. Take the money he gave you and don’t see him again. Change your number. Lay low for a bit.” Wendy startled with the repetitive crash of thunder reverberating in the Honda’s dark and eerie confines. “Can I at least see what’s got your panties in a twist?” She reached for the black cloth covering her friend’s evidence only to be pushed away.

“Oh God, Wendy. I shouldn’t have dragged you and Remie out here tonight. The creep knows I’m a sophomore, but I didn’t tell him which college. I don’t want him to find either of you.”

“Shit, Gena. I may be a student, but I can take care of myself.” A note of uncertainty snaked through Wendy’s voice.

From the back seat, Remie contemplated the wind’s increasing fury, so like her own, sweeping, all encompassing, erratic. Parked along a deserted back road hours before dawn didn’t equate to a tranquil setting when listening to accusations of murder. I should’ve brought my dog. Buckeye would’ve waited in the SUV. She’d just moved back to Portland and lacked the normal discreet channels of investigation derived from time-developed working relationships. Not that I’ve figured out what the problem is yet.

Small raindrops pattering the passenger window progressed to a heavy deluge that silvered with the dashboard’s ambient light. It was a perfect night to snuggle under a blanket with a cup of cocoa and a scary book. Living the scenario brought the rancid taste of bile scalding Remie’s throat.

“Girls, you know I’m a doctor, not a cop, right? What happened to toning life down to live like normal human beings? No more adrenaline junkie. Gena, it’s not like you need the money for tuition. Jesus, if your parents knew what you were doing for thrills, it would kill them both.” Years of schooling in forensic pathology aged Remie decades in the eyes of college girls too naïve to avoid such foolish and dangerous behavior. More than ten years difference thrust her into the role of adopted mentor to the neighborhood wild child with crazy tattooed on her brain.

“Jesus. I’m so sorry, Remie. You spent a night in the hospital last week after wrecking your car. You don’t need this.” Unspoken recriminations gathered around Gena like a smoldering blanket, the flameless combustion withering her resolve.

“I’m fine. The few scrapes and bruises have already healed.”

“I figured a few tricks for kicks, no harm. It’s not like I don’t use condoms, and we’ve only done it a couple times.”

“The harm is that there are real nutjobs out there. Deranged people you do not want to meet. Trust me. I see the results of their work every day during necropsies. It’s what I do… remember?” Visions of Gena lying on a cold slab while an ME separated the upper part of her cranium to create a removable skullcap strengthened Remie’s determination to see the situation resolved.

“Roomie, what makes you think he was a killer? Did he threaten you? Did you see a gun?” Wendy laid a calming hand on her roommate’s arm. “Hell, everybody has guns these days. I’ve got a .357 stashed in my bedside table. Let some psycho come to my dorm looking for easy targets—he’ll get a hollow-point surprise.”

Gena, the cute little kid from the farm next door with wide hazel eyes and curly brown hair had grown up with a nose for trouble, yet usually lacked affiliation with high drama. With the start of the spring semester, the risky escapades should’ve ceased.

“While he was in the can, I picked the lock on his briefcase, thinking he was some kind of lawyer or something.” If not for the frightened gaze bouncing between the proof clenched in her fingers and the nebulous woods on either side of the lonely road, Gena could’ve been any college student recounting a dicey hazing ritual. The tone and pitch of her voice increased when she unfolded the fabric covering her stolen treasure. “I saw syringes full of something, along with empty containers, and these. I also found alcohol swabs and betadine solution. Who carries betadine in a briefcase?”

“You stole from a John? Are you crazy?” Wendy snatched the wooden box with a huff and a groan.

Detailing around the container’s top edge included an intricate inlay bearing a darker grain. Similar designs decorated urns. “You better hope we can return them before he notices they’re gone. Where did you hook up?”

Wendy slid the lid back on the six-by-six inch square. The smooth glide on concealed grooves further testament to the boosted prize’s value.

The rattle and thump of the container ended when it landed perched on the steering wheel, upside down.

“Fuck! What the hell are those?” First medical school, then forensic pathology, enlightened Remie to evil’s worst-case scenarios. Her mom once said that after indoctrination, nothing new would appear under the sun. Whoever created this mayhem transcended anything evolved from humanity’s convoluted gene pool.

A sudden gust of wind and rain blew in as the driver’s door flew open. Gena lurched forward and hunched away from the torrent of slashing storm riding the invading cool blast. Her descent into hell included a flash of silver and guttural laugh.

Reily is a West Coast girl transplanted to the opposite shore. When she’s not working with her dogs, you can find her curled up with a book or writing her next story. Past employment as an ICU nurse, private investigator, and work in the military police has given her countless experiences in a host of different environments to add a real world feel to her fiction.

Over time, and several careers, many incidents have flavored the plots of her stories. Man’s cruelty and ingenuity for torment and torture is boundless, not contained by an infinite imagination. Witnessing the after-effects of a teenager mugged at knifepoint for a pair of tennis shoes, or an elderly woman stabbed repeatedly with a screwdriver for no apparent reason, left an indelible impression that will forever haunt her subconscious. In counterpoint, she has observed a woman stop her vehicle in severe, snowy weather to offer her own winter coat to a stranger, a teenager wearing a threadbare hoodie. Life’s diversities are endless.

Though her kids are her life, writing is Reily’s life after. The one enjoyed after the kids are in bed or after they’re in school and the house is quiet. This is the time she kicks back with laptop and lapdog to give her imagination free rein.

In reading, take pleasure in a mental pause as you root for your favorite hero/heroine and bask in their accomplishments, then share your opinions of them over a coffee with your best friend (even if he’s four-legged). Life is short. Cherish your time.

Connect with the Author