Some men are just off-limits. Like, say, all the other football players in the league.
But I’ve been crushing hard on one quarterback in particular for the last year. When Jason invites me to his place the night before my first pro football game, I say yes so fast. Our white-hot time together answers a lot of questions I’ve had about myself.
Then life happens, and I don’t show up for our second date. The worst part is that he’ll never know how much it meant to me.
And when I’m traded to his cross-town rivals, I know that’s not the time to serve up my secrets either. My team’s PR department wants to double down on our rivalry.
And they’re right. I need to focus on football, not on my interest in men. But the more time I spend doing media appearances and charity events with the generous, quick-witted, popular guy, the hungrier I am for him.
It’s a bad idea to knock on his door late one night. I could lose everything. He’s probably not even home.
But then the door swings open, and I have a choice to make. 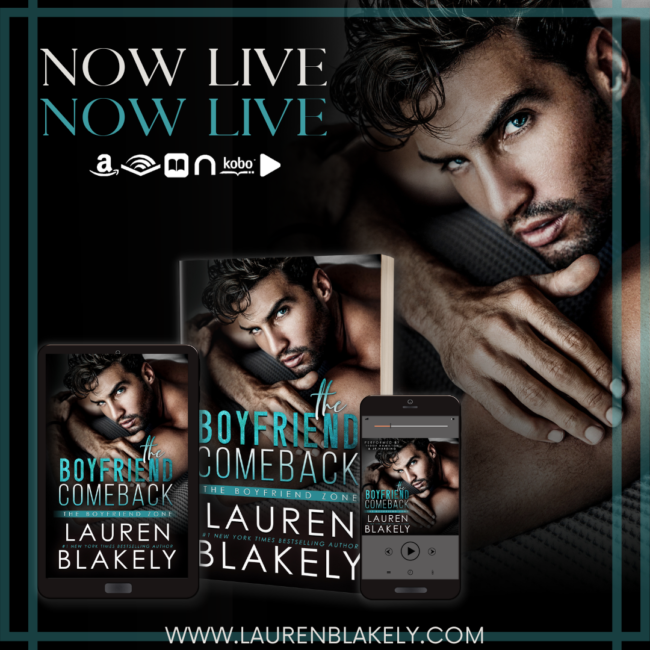 The Boyfriend Comeback is Lauren Blakely’s new MM rivals-to-lovers, second chance football romance! I have been in love with Jason since we first met him in the Men of Summer Series (if you haven’t read that, go and get it now!) Every once in a while a book will just get you in the feels! It comes into your life at the perfect time and you feel it in your heart, body and soul. Jason and Beck’s romance is that book for me this year! There is just something about Jason’s positive attitude, openness, loyalty and humor that draws you in. Beck’s serious, but funny and his struggles made him more human! Together they complement each other perfectly. It’s not easy being the starting quarterback, especially when your crush plays for the city’s other team. It’s also not easy being out and proud in the sports world, but Jason and Beck make it work. They have their ups and downs, but their desire to be together is bigger than all the obstacles. Lauren never ceases to amaze me with her talent for writing deep, fun, sexy characters and she’s quickly become one of my favorite MM authors! Jason and Beck are two of my favorite characters of Lauren’s and you know I don’t say that lightly. There was just something special about these two. They are all heart and soul and their personal stories and their love story just got to me! I hope we see them again soon!

Audio: Teddy and JF were freaking amazing! I love this pairing more than I thought I would. They were the perfect Jason and Beck for me!

The Boyfriend Comeback is the first full-length novel in the The Boyfriend Zone series by Lauren Blakely. I recommend reading the prequel, The Boyfriend Kickoff so you get to see where it all started with Jason and Beck. The Boyfriend Comeback is one year later…
Jason McKay didn’t see this play coming… One year after being stood up by the LA quarterback, Beck was back and playing for the rival team in San Francisco. He never forgot their night together but after Beck not showing up for their second date was a hit harder than a sack on the field. He plans to just suck it up, smile and wave if he sees him. He doesn’t have time for distractions, he needs to lead his team to a championship. His first love will always be football so he needs to get his head in the game and his mind off Beck Cafferty. It’s not like they will see each other much anyway, right?
So fucking wrong!
Beck Cafferty has big cleats to fill. He was shocked that he was traded to San Francisco. Last time he was in SF, it was life-changing and maybe this is a sign that it’s time to explain to Jason why he didn’t show-up for their second date. If the man will even talk to him. They are now rivals after all. What he didn’t expect was that he will be talking to him on-air weekly! What he did expect was the chemistry they still share. It’s complicated, passionate, emotional, and very off-limits.
These two!! My God, they are fire! Between their banter and their heat between the sheets, they are everything! But, it’s a huge risk for their careers. Would their teammates, coaches, team owners and especially the fans cancel them if they came out as a couple? They are both under so much pressure already, will it be worth the risk to sneak around? Or should they end it before it truly begins?
I absolutely fell in love with Jason & Beck. They have their struggles and their strengths. Both make them even more special. They made me laugh, cry, blush, and cry some more! I can’t wait for the rest of the series.
Quotes:
“How about a little back-to-back action?” Asher says.
Jason tries to stifle a laugh but fails.
Asher rolls his eye. “Not everything is dirty, McKay.”
“But some things sure sound that way.”
“To you, Jason, to you,” Asher deadpans, but it’s clear he’s entertained by the Hawks quarterback.
This is want. This is thirst. And I will quench it tonight.
“C’mon. Get those lips on mine. You know you want to kiss me. Especially since you like my dimple.”