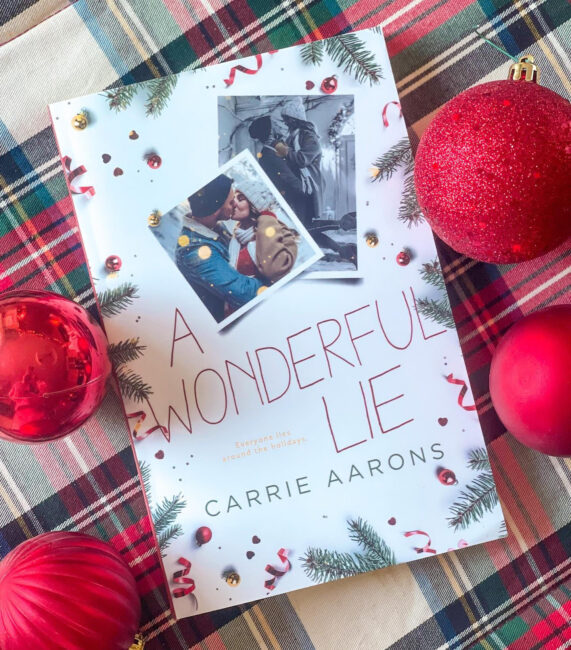 A secret holiday romance between coworkers who talk love and dating on competing podcasts? Say no more! Carrie Aarons’ just released A Wonderful Lie, which is a workplace rivals, reverse grumpy/sunshine romance that will give you all the feels you crave during the festive months! It’s the perfect spicy read to pair with a cozy blanket and some hot cocoa … don’t worry, your newest golden retriever book boyfriend will also warm you up *wink wink*

Everyone lies around the holidays. We lie about the money we’re spending. We lie that we’re following our diets.

What am I lying about this year? The fact that my workplace nemesis has become my friend-with-benefits.

Collin Machlan and I have been each other’s competition since we joined our college’s radio station freshman year. Six years later, we’re both hosting shows for the country’s most popular podcast network.

Just as everything starts turning red and green, our boss announces a promotion, and whoever gets the most listens during this merry season will be crowned the winner.

There is just one catch; the only way to draw an audience in December is to theme every episode around Christmas. For a woman who typically celebrates alone with takeout and slasher flicks, I’m at a big disadvantage.

Going toe-to-toe with the guy I’ve never been able to intimidate is only made harder by the fact that Collin doesn’t seem to want to play our usual games. Add in some mistletoe and a Secret Santa swap, and I finally give in to his shameless flirting.

Maybe it’s the delusion of cuffing season, but suddenly I’m spending every night with him. No one at work knows. Neither does his family, or my friends. I lie that it’s just physical. That me, a self-proclaimed bachelorette, couldn’t possibly be on the brink of a relationship. I lie that we’re still competing for a job he doesn’t even want.

Until one too many lies threatens to topple my life like a crooked tree with poorly-distributed ornaments. And I’m left to decide between my lonely and blue traditions, or a love that lasts all year round.

A Wonderful Lie is Carrie Aarons’s newest enemies-to-lovers romance with a twist of Christmas cheer. I have read almost of Carrie’s books and this has to be one of my favorite couples!
Lark was not a fan of the holidays. She was even less of a fan of her coworker, Collin. He is a cocky playboy who has been the bane of her existence for the last six years. They both talk about sex, dating, and love in different ways on their podcasts. Their ratings are always on top but now it was game on when they have to complete for the top time slot. The issue? One, it’s December so the shows need to be holiday themed. Two, their one-night stand is way too hot to not want more…
It’s cuffing season and for Lark and Collin, it makes their relationship, whatever it is even more confusing. Neither of them know really know what they are doing. Sex? Oh, they have that down. Dating and love? Not so much. They are both twenty-four years olds who have never been in love or have had a lasting relationship. Can they even have one now? They are coworkers who have always had hate with a touch of sexual tension kind of relationship and everyone knows it. Plus, it could never work anyway, right? All the secrets, lies, mistletoe, Christmas cheer, it’s all too much.
I want to be Lark when I grow up. Lol. She is a badass who knows what she wants, in the bedroom at least. And Collin, damn… that man is fire. For real though, I loved these two! I felt their passion for each other and their work throughout the book. Even when that passion for full of hate. Yum! Nothing wrong with some hot hate sex, am I right?
Quotes:
“Wow, you sincerely want this. Subjecting yourself to sleigh rides and mistletoe to win? Cutthroat.”
Fucking hell, we’re going to destroy each other.
She’s heaven and sin wrapped into one, a polished professional who wears turtleneck sweaters while discussing edging like it’s the flavor of coffee in the break room that day.