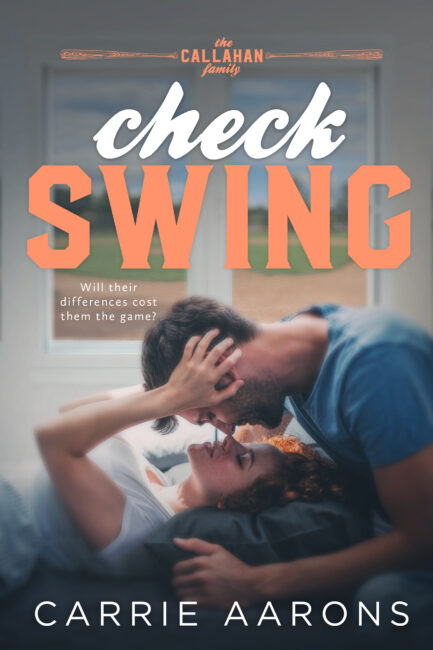 Born into one of the richest, most notorious families in the country, the black sheep title was stamped on him from an early age. While the rest of his relatives earn their keep at the top tier baseball team they’ve owned for generations, Sin prefers spending his time and money on booze, babes and bad decisions.

Until all three land him in a coma, fighting for his life.

One year later, with a sober chip in his hand, he arrives at spring training ready to turn it all around. But when he meets the only woman who doesn’t recognize just who he is, he can’t help omitting a few important details … like his last name. No stranger to charming women, Sin uses one of his old skillsets to kick off what is sure to be an epic hookup.

But when she shows up five months after their brief Florida fling with a secret that will topple his privileged world, he might just lose everything he’s worked so hard to rebuild. Including a real shot at love with the sassy redhead that he’s been too much of a coward to pursue.

Can he shoulder the responsibility he’s always shrugged off? Or will he balk at the real-life complications and strike out completely?

Francesca Kade is an independent goal-getter.

As one of the only female strength coaches in the league, she’s used to invading the boys’ club. After putting up with being passed over and not promoted for a number of seasons, she’s finally got her shot.

A consummate professional with blinders on, there is no way anything will screw up all she hopes to achieve. Well, except for maybe the new employee with eyes the color of ocean waves and a smirk that’s the definition of sin. When they catch fire in the southern heat, it’s almost impossible to put it out.

Burned from the betrayal and panicking with a fresh secret of her own, Frankie is shocked when she lands her ultimate dream job. There is no way she’s turning it down. But when she bumps into Sinclair on day one, all of the old feelings and new problems come hurtling at her like a baseball to the face.

Will she ever be able to trust that he’ll put both her and his responsibilities before his vices? Or will their differences cost them the game?

Check Swing is the third book in the Callahan Family series by Carrie Aarons. You can read as standalone but I highly recommend the series since they are all unique, beautiful, and amazing. I have been waiting for Sin’s story. The bad boy in the family. Just his name is swoon worthy and trouble.
Sinclair is the black sheep of the family. The party boy who can’t keep a job even when they are handed to him. His family ownsthe Packton Pistons, each member works for the team in some capacity. He hit rock bottom a little over a year ago and now it was his time to get in the game of life. One year sober and his father sends him to spring training to be an assistant video production manager. A job he didn’t earn but one he hopes to enjoy and stick with. What he wasn’t planning for was her. A woman who intrigues him from the moment he sees her. And, the perk was that she had no idea who he was. He hated not telling her, it let him be himself though. To not just be a Callahan but Sin. A man who made her laugh, hot and bothered, and have a spring training fling with.
That was what it was only supposed to be. Three months. No strings attached. Frankie didn’t want anything more than that but when he left, she was heartbroken. Now, she was in Packton with a promotion. She was excited about her new job. What she didn’t expect was to see him. And gets the shock of a lifetime when he is a Callahan. He might want to start fresh but can she trust him after lying about who he was? Was it all a lie? His feelings? His troubles? What else was he hiding?
I loved these two! Sin is more than anyone expected. I knew he was something but damn. And Frankie is a badass. She knows what she wants and doesn’t play around. They are both determined and motivated. Together, they are full of passion, love, and laughter. I am so hoping there are more stories in this series! I can see the next book…
Quotes:
Sinclair is trouble, that’s for sure. Just the kind of trouble I want to try several times before I know better.
“I wasn’t aware you were emotionally off-limits. Now my plan to get you to fall in love with me is thwarted.” She snaps her fingers as if to say aw shucks.
Like she said, trying harder is worth a lot. In this instance, it’s worth everything.

When she isn’t writing, Carrie is busy binging reality TV, having a love/hate relationship with cardio, and trying not to burn dinner. She’s a Jersey girl living in Texas with her husband, daughter, son and Great Dane/Lab rescue.