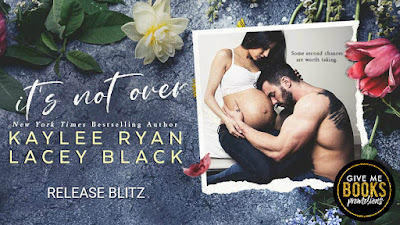 Title: It’s Not Over
Authors: Kaylee Ryan & Lacey Black
Genre: Contemporary Romance
Release Date: July 23, 2019
Blurb
GwenLately, life definitely isn’t how I envisioned it. I had it all. The house, the
job, the husband. Until one day, I didn’t. I don’t know when exactly things
started to change between us, only that it did, and in a big way. So much so, I
found myself standing before a judge and signing off on the end of my marriage.
To the only man, I’ve ever loved.

Now, he’s back, fighting, and ready to prove to me that we made a mistake, that
our love is worth giving this another chance. I’m not sure if he’s right, but I
know what my heart wants, and it wants him. My ex-husband.

Why is it that you don’t know the depths of your mistakes until you’ve already
made them? I knew signing those papers was a bad idea, but I thought that’s
what she wanted. The minute we stepped foot out of that courtroom, it hit me.
She’s no longer mine.

That’s when I also realized, that I would do anything to change the past. I
have so many regrets. Not her. I could never regret her, but how we ended. We
never should have ended. I’m in for the battle of my life to convince her to
give us another shot. I have a plan, one that will prove to her that, it’s not
over.

It’s Not Over is the first novel by the duo of Lacey Black and Kaylee Ryan. I have read every word Lacey has written and loved each and every one of them. And this is actually the first piece of work I have read by Kaylee and I know it won’t be my last. Together, these two have made co-writing look easy, from the reader’s point of view. They blended perfectly. I don’t want to spoil anything so I will try to make this quick.
They had it all. Love. Family. Friends. A home. Careers. Harrison as an gym owner. Winnie as a preschool teacher. They never fell out of love with each other but it wasn’t enough. Their lives were in sync one day and then the next it wasn’t. That’s how it felt anyway. It was a slow progression that hit hard at the end. It was all about communication and they didn’t have it. Harrison worked long hours. Winnie was home waiting for him. It wasn’t the life they planned.
Harrison didn’t want the divorce. He thought that’s what she wanted and he would do anything to make Winnie happy. So he signed the papers and immediately regretted it. He was ready to fight for her like he should have when he left her on the couch months ago. This time he was not letting her go. He had more reason to fight. He knows what it’s like to lose her. He can’t let it happen again.
Winnie missed her husband. Ex-husband. She will always love him but she had to let him go. But now he is back. Fighting for her. Fighting for them. Harrison blamed himself but Winnie takes the blame as well. It takes two. Can she risk falling even more in love with her ex-husband when there is a chance it can fall apart again?
I swooned so hard with this one. Harrison doesn’t pull any stops. He is full steam ahead. He wants to date his wife. To woo her all over again. He wants his wife back. Forever.
Overall…I fell hard. For the characters. For the writing. For the story. For the secondary characters. It really had it all. I laughed. I cried. I felt their love. I wanted to cut a bitch. I wanted to give Winnie a hug and Harrison encouragement. I also wanted to be there to witness Chase (Harrison’s best friend) and Gabby’s (Winnie’s sister) banter. Omg! Their story is going to be epic.
Quotes:
“I’m sorry, but fuck, Gwendolyn, you’re my fucking heart. I don’t know what to do without you.”
“Don’t be afraid, Winnie. I let you down once, but I’d rather die than do it a second time. Trust me.”
My sister smiles sweetly. “I’ve missed you too, Chase. But at this range, I’m sure to hit my target.”
Kara's Review

It’s Not Over is the first book co-authored by Lacey Black and Kaylee Ryan. I’m a long time fan of Lacey, but this is my first Kaylee book. I thought they did a fantastic job writing together and this is just the beginning! It’s Not Over is a unique love story. Gwen and Harrison are it for each other. The love of their life. But things took a turn and they ended up signing divorce papers. That’s not the end though. It’s just a new beginning. Harrison isn’t going to stop fighting for his wife. She’ll always be his love, his life, his wife. Gwen isn’t so sure. She doesn’t want to get her heart broken again, but she can’t deny he’s it for her. Her other half. Once Harrison convinces her to fight again, it’s on! He’s not making the same mistakes again. He’s not giving up. He’s never losing her again. Gwen is more cautious, but she loves him. It’s not going to be easy, but it’s going to be worth it. They were meant to be together and they made a mistake getting divorced. I loved watching them fall in love again. They never stopped loving, they just stopped seeing each other. Harrison is a force to be reckoned with and Gwen never stood a chance. It’s sexy, funny, emotional, sweet, romantic and steamy. I’m already looking forward to Chase and Gabby’s story!

Kaylee Ryan is a
New York Times and USA Today Bestselling author.  When she’s not spinning
tales of happily ever after, she’s reading or spending time with family.
Born and raised an Ohio girl, Kaylee resides in Cincinnati with her husband and
their son.
WEBSITE
FACEBOOK
TWITTER

Lacey Black is a Midwestern girl with a passion for reading and writing.
She carries her e-reader with her everywhere she goes so she never misses an
opportunity to read a few pages. Always looking for a happily ever after, Lacey
is passionate about contemporary romance novels and enjoys it further when you
mix in a little suspense. She resides in a small town in Illinois with her
husband, two children, and a chocolate lab. Lacey loves shooting guns and
should only consume one mixed drink because she’s a lightweight.
WEBSITE
FACEBOOK
INSTAGRAM
TWITTER