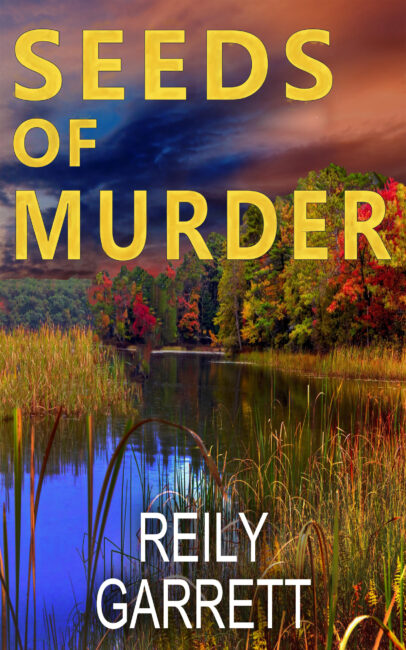 Witness Darby Loughlin shifts from hunted to hunter in this spine-chilling thriller of murder, greed, and romance.

On a secluded mountaintop, Darby Loughlin witnesses her mentor’s death during an afternoon hike. It’s murder. She knows it but has no proof. The killer isn’t present, nor does he leave traceable evidence.

Teaming up with former police officer turned private investigator Nick Tucker is a distraction and unwelcome necessity. Unfortunately, she lacks the skills and tools needed to trace the camouflaged assassin.

Straddling the law has never been a problem since her moral compass points true north. This time, however, she must work with authorities to gain insight into a world to which she doesn’t belong.

As the snarl of lies and deceptions unfold, Darby and her K9 partner struggle to stay ahead of the killer who’s selected her as his next victim.

That nagging itch, the dark harbinger of malignant intent with no basis in reality, dusted the surface between Darby’s shoulder blades.

Beside her, Boots romped along the trail, his doggy grin and sweeping tail signifying the innocence and joy of frolicking in the woods.

“Don’t be so hard on yourself, Darby. The semester’s over. You’re off for the summer and don’t have to worry about GPAs and scholarships. We’re hiking one of the best trails in the Appalachians, and your best friend is by your side.” Basil nodded to the golden mix sniffing the entrance of a small tunnel.”

“I wouldn’t get too curious, there, boy. You may not like what comes out.” Darby nudged her dog’s nose away from the burrow.

Her mentor was right, but an undefined menace prickled the hair at her nape, not mellowed by the thought of crystal-clear water ahead. The small lake normally offered a visual respite from worries and obligations.

Normal excursions rendered the rich hodgepodge of scents that lulled her into a unique calm: resin from a broken pine limb, damp moss, wild honeysuckle, and the distinct odor of filtered wood smoke from a distant home.

“Explain.” He tilted his head to the side in consideration.

“Look up. That doesn’t look normal to me, but you’re the cloud expert.” Darby gestured toward the sky as they stepped from the forest’s edge. Perspiration dotted her brow, cooled by the light breeze.

The steep downslope ahead met the water’s edge of a small lake—one in which Boots liked to play.

“Looks like my partner is running an unscheduled operation today. Damn it. I told him I intended to collect samples.”

It existed in any diligent scientist’s nature to measure the results and consequences of his experiments. Basil understood that every action elicited an effect. Over the months of testing, he’d remained determined to evaluate each.

Sharpness of the water’s surface image reflecting the small fulminating clouds overhead attested to a subtle paradox with the scents of budding flowers and musty earth. It was nature’s first warning to creatures who survived by instinct.

Even as they watched the cloud pattern change, its center darkened, transforming the local cap to that of a boil. As it matured, the bulls-eye appeared heavier, as if the pus-filled center developed into a head ready to spill its contents.

“What the hell is that?” It appeared heaven’s Cyclops watched her every move. She wasn’t paranoid by nature, but leaving home as a teenager developed an ingrained sense of vigilance.

Below them, the first raindrops stippled the lake’s far side, disrupting its glass surface and the scenic view.

“I hear drones.” The tremble in her voice lacked rational explanation.

Her mentor’s inherent trust in others always struck a discordant chord in her. She had an ample supply of faith for those who’d earned it, which was limited to her golden retriever and her mentor—whose knuckles cracked as he slip-skidded down over fallen limbs and wet leaves.

“Yeah, I hear ‘em. It seems my partner has no regard for our working relationship.”

Impulse prompted her to sidestep until cocooned by the woodland’s embrace. An elevated vantage point prevented her from gauging his expression, but his tone conveyed confusion.

Her pulse kicked into high gear. She’d spent a lifetime learning to monitor her surroundings for threats. Internal alarms blared to contradict the peace normally found on their infrequent hikes.

The first drop of rain filtering through overhead branches made her flinch. Instead of turning her face up to revel in its cleansing properties, she tugged up her jacket collar. Her backpack would help keep her dry, but her gut churned with uneasiness.

From the slope’s base, Basil cast a wary glance upward. “You two stay on the ridge. I’ll be up in a minute.”

“What are you hoping to find? Your job is to make it rain, not test soil samples.”

“Proving a theory. Something’s killing local wildlife by seemingly natural means. However, it’s not natural. Whatever it is, has been sporadic and coordinated with specific parameters I’m tracking.” Shifting his backpack to center its weight coincided with arthritic knuckles cracking above the steady drizzle.

“Is that why you weren’t keen on me tagging along today?” The sooner they returned to his vehicle, the sooner she’d take a deep breath.

Basil paused, the look thrown over his shoulder revealing an uncharacteristic inner turmoil. “You have a keen sense of observation, and this corresponds to your bailiwick. Look at the dead grass and burned foliage around you. As a young botanist, what would you make of it?” Bending down, he placed a specimen of shriveled weed along with a small dirt sample in the baggie extracted from the side of his backpack.

The sound of another drone expanded the frosty knot blooming in her chest. It’s just a little rain, wimp.

Despite waking up to a beautiful sunny day, she couldn’t shake the sense of gloom enfolding her like a shroud. She’d cast off that darker persona born of a homeless teenager huddling in a cave against the cold of night.

He was right about the shriveled foliage. Years spent hiking and enjoying the beauty nature offered had never revealed the likes of what surrounded her.

One more year and she’d have her master’s degree in botany. Yet the pattern of destruction confounded her determination to define its source.

“I hear more drones… What kind do you use to seed clouds?” It still amazed her that science had progressed to the point of forcing rain with specific chemicals.

Basil grinned. “Always curious. That’s good. I can show you when we get back to the truck. I have a picture on my phone of the new model we use for small areas. My assistant and partner are touting this prototype as the next great advance in weather enhancement.”

From his pack, Basil pulled several plastic tubes and took samples of mud and water from the bank’s edge, taking time to swipe moisture from his face.

The distant whine of motors drew her attention to the discordant notes grating her nerves and the boiling masses that tumbled and seethed in anger. She shrank farther back for cover. Boots licked her hand and whined when she sat. “It’s okay, boy. Basil says it’s his partner’s idea of a joke.”

She didn’t find it funny.

The unusual pattern of cloud cover remained small and tight, as if nature created a storm for a specific, localized area. The speed at which it built hinted at a distinct purpose, giving thought and direction to an inanimate collection of condensed water vapor.

A short distance away, blue expanse surrounded the unbroken and strange configuration.

“Basil? Look.” The eerie premonition taking shape in her mind squeezed her chest.

He’d just capped a specimen bottle and straightened when thick drops of water gave way to small icicle-shaped missiles. A faint rainbow of fluorescence encompassed the air within the shower’s borders.

“Ahh, shit!” The plastic bottle slipped from his hand and bobbed in the shallow water. Frantic sweeping of his fingers against his cheeks preceded yanking his light jacket up to cover his head. “Run, damn it. Get out of here!”

Seeds of Murder is the third book in the Moonlight & Murder series by Reily Garrett. Each can be read as standalone but I recommend reading the series so you can get to know the couples that previous fell in love. Each book is a different couple but they are intertwined and turn into a family of sorts. If you read Critical Tangent then you have met Nick Tucker, PI. It’s his time to see what Nolan and Coyote have been through with their ladies. Trouble with a capital T.

Darby and her mentor, Basil were out hiking and collecting samples for research when they were under attack. Basil unfortunately doesn’t make it but tells Darby to find Nick, the only man he can trust to seek justice. To find the truth of what has been going on with cloud-seeding and unexplained animal deaths. Darby seeks Nick out and at first the PI doesn’t want anything to do with it until she tells him how important Basil was to her and especially when it comes down to a life or death situation. He is a protector and he wants anyone near her. So, he enlists people he can trust. Right away, the three women look like they are up to something. And with Keiki and Sabine’s pasts, it’s not good. Nick knows he is going to get his ass kicked by their SO, Nolan and Coyote. Can the six of them work together to solve a murder and solve the case of the dying animals?

I am really enjoying this series. It’s different from my usual books. It’s suspense, crime, and science within the love story. It’s a build-up while working on finding a killer. They can’t afford a distraction and while solving the case they get to know each other. Darby might only be twenty-one but she has lived a hard life that made her grow up fast. I loved Nick and Darby’s banter. It’s light with a mix of flirt and laughter. And when the three women are tighter? Forget about it. They are so funny and for sure know how to find trouble. They are all independent, strong, and want to help out wherever they can even if the men tell them to stay put.

Overall…it’s a book full of suspense, laughter, love, and friendship. I am soooo hoping there is another book with a certain character!

“Can it, Watson. You’re in over your head.” The hissed warning came with a hand pulling her to her feet.

“That would make you Sherlock. I don’t think you fit the bill. He was shorter, hmm, maybe six feet, thinner, wore a gray traveling cloak…”

“You calling me fat?” He snorted as he dusted himself off.

Okay. Now I know what perfection looks like. And it doesn’t wear a badge.

Nick whispered in her ear. “You’re not alone anymore. You have friends. You have me.”