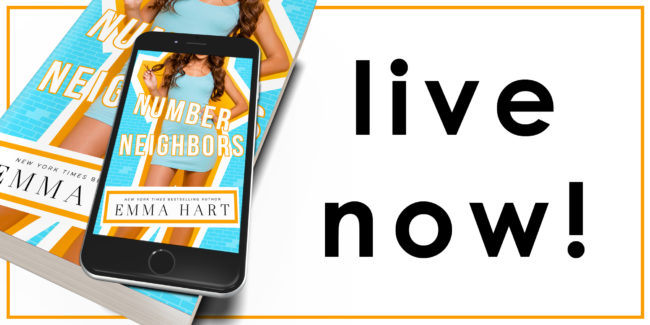 What happens when your number neighbor turns out to be your hot, British, next-door neighbor? 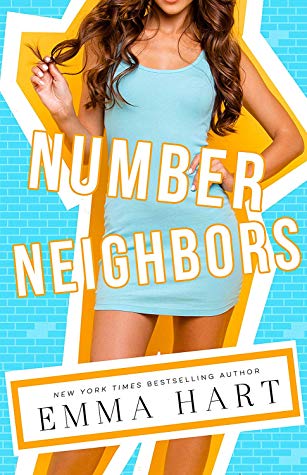 In my defense, my friends did it too, and their neighbors took it as the joke it was.
Mine didn’t.
He responded with a dirty text of his own. Next thing I know, I have a standing texting date every night at ten-thirty.
Until I have to miss it because the stray kitten who adopted me one week ago is sick. The only person I know who can help me at this time of night is my British next-door neighbor and local vet, Isaac Cooper.
I’ll keep him overnight, he says. Here’s my number to call me in the morning, he says.
The problem?
I know that number.
Because I’ve been texting it every night for the last four days.

Number Neighbors is Emma Hart’s newest funny AF novel. It is a complete standalone but if you read Frenemies then you will remember Hannah, Imogen’s cousin and prank partner! Well, this is her story…
Who said sending a dirty text to you number neighbor was a good idea? Nobody, that’s who! Except, it was done by three women who had been drinking and having fun. And it was all fun and games till Hannah’s number neighbor texts back and is all for the dirty talk. So much so that it happens for a few nights. That was until she was hot with reality! Her number neighbors is her actual neighbor. As in her hot AF British neighbor who was also the sexy Vet in town. The one she has been crushing on since he moved in next door months ago. She was so f*cked and if Isaac was anything like he was in his texts…
Omg!! This book is hilarious!! I love Isaac, he is blunt, swoon-worthy, sweet, and funny. And damn, his accent? Yum!! And I might just have a girl crush on Hannah. She is feisty, funny and smart. Together, their banter is epic. Their chemistry is hot. Their story is sooo good. Emma added so much heat to this one. It was a perfect blend of all the feels.
P.S. I ♥️ Grandma Jean!
Quotes:
“Are you aware that you’re an eighty-year-old bully?”
“Yes, dear, but you’re confusing me with someone who gives a shit.”
IMMY: Do you think he fucks with a British accent?
ME: I can’t talk to you when you’re like this.
“Thank God. I was thirty seconds away from needing to go wank in the shower.”
“Have you done that?”
“Oh, sure. All the British words, and ‘wank’ is the one you know.”
I grinned. “I know the important ones.”
Kara's Review

Number Neighbors is Emma Hart’s newest laugh out loud, sexy story! Hannah has had a crush on her sexy British neighbor for a while. One night she decides to text her number neighbor and one thing turns into sexting! Then she finds out her number neighbor is her actual neighbor. Isaac. How is she ever going to look at him again now that she knows? Isaac has had a thing for his sassy neighbor and now that he knows she’s his sexy sexter? Now’s his chance to make a move. They already know they are attracted to each other, he just has to convince her to go on one date. Hannah doesn’t know what to think, but man is Isaac dreamy! That accent, those forearms. Yummy! Will sexting turn into real life? Oh boy! Emma turned up the heat with his one. I laughed out loud and had to fan myself. Sometimes at the same time!

Me: Don’t be daft? What does that mean?

Isaac: Fuck me. We’re going to need a translator.

“You lose an argument the moment you say English. You can’t argue with an English person about the English language.”

“I don’t know how to talk to you. It’s like running in circles all the time.”

Emma Hart is the New York Times and USA Today bestselling author of over thirty novels and has been translated into several different languages.
She is a mother, wife, lover of wine, Pink Goddess, and valiant rescuer of wild baby hedgehogs.
Emma prides herself on her realistic, snarky smut, with comebacks that would make a PMS-ing teenage girl proud.
Yes, really. She’s that sarcastic.