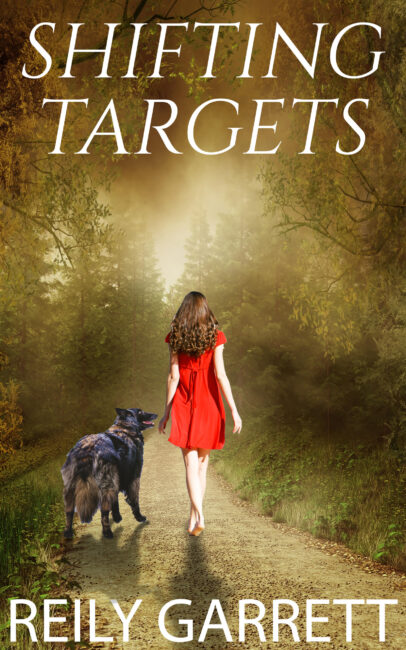 Raw grit and determination shift Keiki Tallerman from hunted to hunter in this gripping thriller of murder, pursuit, and revenge.

Keiki Tallerman’s resolve to find her parents’ killer doesn’t stop when police detectives’ leads turn cold. Guilt over the circumstances won’t let her rest until she identifies the shooter.

Tenacity prompts the tech prodigy to strike an unusual bargain with a private investigator, her drones for his experience. They both have a lot to learn.

Nick Tucker’s frustration with the legal system leads him to the private sector where a college coed with more courage than self-preservation crosses his path. He’s willing to bend a few rules to keep her alive.

New paths offer glimpses into life’s underbelly, a world of shadows, deceit, and death. A world Keiki never knew existed. With a shepherd by her side, she pursues each lead despite the target on her back.

The question remains, who will strike first, and who will be left standing when the dust settles?

Shifting Targets is a prequel novella in the Moonlight and Murder series by Reily Garrett. I have read the series and have really enjoyed the suspense, mystery, and romance. I have wondered about Keiki and Nick’s beginning so this was awesome. No, it’s not a romance. They are friends and co-workers.
Keiki wants to catch a killer. The one who killed her parents in a parking lot. Nick was there when she heard the devastating  news just a few weeks ago but since then he left the force. He was now a PI and he could use some help with his recent case. Nick sees what lays behind Keiki’s eyes. Determination. It’s a good thing but it’s also dangerous so he comes up with a proposal. To team up.
Will Keiki stay out of danger? If you read the other books then you know the answer. This woman is fire, and this is their start to many things to come.
I thought it was great to see their beginning. The banter. The friendship. The growls of frustration. Haha.
Quotes:
“There’s no way to win with you, is there?”
“Surviving is winning. You’re like the sister I never had. Right now, I’m thanking God for unanswered prayers.”
“You okay for tonight? I can park it on your couch if you want.”
“Nah, but, is it okay if Heathen stays with me a little longer?”
“No problem.” Bending down to rub the dog’s chest, Nick said, “Be good, boy. Protect this wild child.”
“Let’s rewind for a minute. You mentioned spanking when you first came in…” Shelly giggled at Nick’s horror-stricken expression

Silence had a feel.

It wasn’t the stillness of morning before her parents padded down the steps. Those stairs would never creak under their weight again.

It wasn’t quiet born of exhaustion despite having sat at the kitchen table all night. The invisible shroud engulfed her mind, clouded her thoughts, and threatened to suffocate her with its cloying mantle.

What she wouldn’t give to see her mom and dad’s faces one more time, to hear their teasing remarks about leaving the solder gun out or dirty dishes in the sink.

The intricate structure had begun with a challenge by her dad. “Make it lighter, user friendly, and more functional.”

It wasn’t the drone’s fault her parents were dead. No, that debt rested on Keiki’s spoiled shoulders. She’d wanted to have a small party and had asked them to stop for a half gallon of chunky monkey.

The why of the senseless tragedy still haunted her weeks later. If she didn’t find justice for them soon, she’d suffer eternal insomnia.

The time had come to suppress remnants of guilt dragging its serrated edge across her consciousness. She equated it to a scar that would diminish in time but be forever present.

Her folks would want her to move forward. Always forward. Never look back.

“Time to prove to the world my parents were successful in raising their kid.” Speaking to the empty room, she refused to wallow in the shadows any longer. Nothing would engulf her spirit in darkness.

Her friends were right. Something needed to light a fire under her ass. If the cops couldn’t find the killer, she’d give them a helping hand. She was a mechanical prodigy. Her parents had devoted their lives to ensuring she had every advantage. It was time to energize her slumbering gray matter.

She needed a path, a new direction, and a positive attitude. Stepping outside her comfort zone would expedite all three.

Her morning’s planned endeavor could accomplish that and give her a visual reminder of who she was and from where she’d come.

Reily Garrett is a writer, mother, and companion to three long coat German shepherds. When not working with her dogs, she’s sitting at her desk with her furkids by her side.

“This could be James Patterson, Lee Child, and Tess Gerritsen rolled into one, but the dark, twisted methods used by the serial killer could surprise even those readers…” – San Francisco Bay Review

Prior experience in the Military Police, private investigations, and as an ICU nurse gives her fiction a real-world flavor.