The Smile and Other Stories by Nina G. Jones writing as Cyn Nightly is LIVE! #One-click today 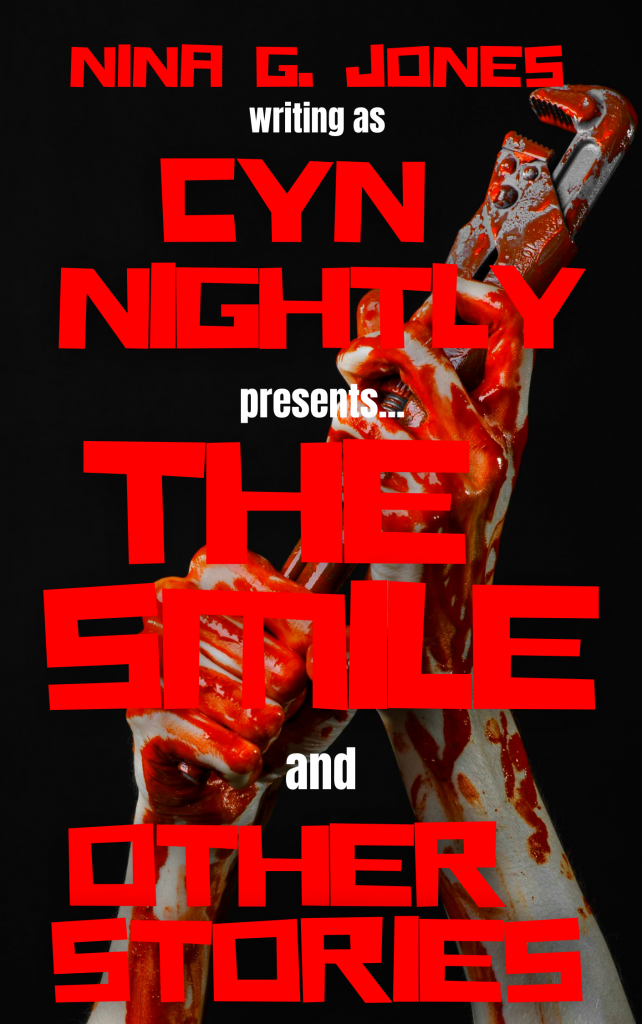 This collection contains a diverse mix of horror genres with familiar backdrops: a cabin in the woods, an isolated hike, a car on a lover’s lane. But these stories are not your typical slashers, they are horrors of the mind. While there is no shortage of gore, the true terrors in this collection are the demons we all may face at some point in our lives: betrayal, grief, the loss of a loved one, sexual assault, revenge.

𝙒𝙝𝙖𝙩 𝘾𝙖𝙢𝙚 𝙒𝙞𝙩𝙝 𝙏𝙝𝙚 𝙎𝙩𝙤𝙧𝙢: After the unexpected passing of her father, Carlie and her fiancée, Arielle, plan to spend some alone time in his cabin. On the first night, an unexpected guest appears.

𝙏𝙝𝙚 𝙎𝙢𝙞𝙡𝙚: What happens when two evil men cross paths and you are stuck in the crossfire?

𝙒𝙝𝙚𝙧𝙚 𝙏𝙝𝙚𝙮 𝙂𝙤: A woman tries to find her way back home after a cursed hike.

𝙏𝙝𝙚 𝙒𝙞𝙣𝙜𝙢𝙖𝙣: Rav, a self-proclaimed pickup artist has to cut some corners to maintain his reputation. One night, the tables are turned and it’s Rav who finds himself to be the object of someone else’s desire.

𝙏𝙝𝙚 𝙈𝙤𝙤𝙣𝙡𝙞𝙩 𝘽𝙧𝙞𝙙𝙜𝙚: A devastated woman gets the rare chance to bring her lover back to life. She thinks the price she paid upfront will cover the cost, but she soon learns that there is a much larger balance due.

Add to your Goodreads TBR: http://bit.ly/TSAOS_GR

WHAT CAME WITH THE STORM

Two women. A cabin the woods. Miles away from the next one. During a snowstorm. Not creepy at all, right? It totally is especially when a stranger appears suddenly in the middle of the night.

Arielle and Carlie are there to pack up Carlie’s father’s isolated cabin after his death. They thought it would be a relaxing a few days and nights but it’s anything but…

A twist I didn’t see coming!

Something wasn’t right. No shit, right?

His smile made her melt. It later made her scream. It was supposed to just be a dinner date then he surprises her by taking her to lookout point. Now, she was in the middle of two evils. Which one will win out? Will any of them make it out alive?

It was the kind of smile that was, in the most literal sense of the word, dazzling.

It was as if he declared checkmate on a game of chess I didn’t even know we were playing.

It was a typical day. Devin and his fiancé, Lindy wanted to try a new hiking trail near their new home. During their little adventure they come across some odd and fascinating statues and trees. It was a great trip out in the wilderness until one of them disappears…

Oh man, I was on the edge of my couch with this one. I had to know what was going to happen next and it’s definitely different than the other two stories.

“If we’re going to break the law, we might as well be good citizens about it,” he insisted.

“Fine!” I shouted, pacing ahead of him toward the trail. “Just go ahead and leave evidence of us breaking the law, ya boy scout!”

“This isn’t funny,” I ended with a quavering voice.

Holy. Shit. Yeah, I said it. A manwhore who needs a lesson and a woman to give him one. It’s definitely a night he will never forget. I can’t really get in to it anymore than that. I will say, it’s a good thing I love dark reads. It prepared me that’s for sure.

Sure, it sounds like the start of a horror movie, but I’m still feeling hopeful that this is just the end of a very kinky night. After all, this isn’t the first time I’ve been tied up by a hot girl.

“You might want to shut the fuck up. This is the part when I start unveiling little clues about why you’re here.”

Wow. Two months before their wedding there was a tragic accident. Six months later, Angelina was a mess. Depressed and didn’t see a light at the end of the tunnel. That was until she saw neon light and a woman who could bring her fiancé back to her. At a cost. Will it be worth it?

Damn, I feel bad for Angelina. The poor thing. I can’t say anything more.

The world had not only lost its color, but its shape and its sounds.

“There are consequences to anything you do.”

**Overall, this was perfect for my Halloween-loving heart. Got some gore. Some love. Some kidnapping. All the makes for some darkness that I crave. Being born on Halloween does that to a person. 🎃

To celebrate the release of The Smile and Other Stories, Cyn Nightly is giving away two ebook copies. Head to Facebook to enter:

Cyn Nightly is debuting her first horror collection, The Smile and Other Stories on October 15th, 2020.

Cyn Nightly is the horror pen name for Nina G. Jones, a bestselling author in dark romance and erotica. In that genre, her titles were known for their psychological exploration of character motivations, blurring the line between hero and villain.

Under the Cyn Nightly moniker she will be translating her unique style to modern horror with stories that will not only make you cringe, but question your own morality. These horror stories will keep you thinking—and perhaps have you double-checking the locks on your doors—long after you’ve read them.