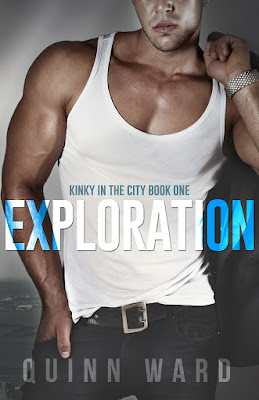 The reluctant manager of his family’s restaurant, Frankie attempts to live up to the legacy of his father and grandfather. Running a business that isn’t his passion and trying to do it without asking for help leaves him turning to less-than-legal means when he wants to surrender control.

Newly divorced, Calvin no longer lives in the closet, leaving him searching for what he most desires- control. So when he finds Frankie on his knees in the back room of a local bar, Calvin sees the sub he’s only ever fantasized about having.

Can Calvin find the confidence to explore his dominant side while showing his younger roommate that submission isn’t only about whips and pain?
Sandra's Review

Exploration is the first book in the Kinky in the City series by Quinn Ward. I do love my M/M and this author’s alter ego so I just had to have the book. It’s does have that added kink from her other novels. But it’s not all about whips and chains with these two. It’s about letting go of some control in all aspects of life. To just feel.
Frankie is stressed beyond belief. He runs the family business even though it’s not his dream. He feels stuck. Stuck in the office and stuck physically and mentally. He isn’t out to his family. He is tension filled except when he goes to Club 83 after hours to let loose and take some control of his life. It’s not the safest way of doing things but it works for him. That was until his older roommate, Calvin catches him in the act. Then, his world is turned upside down.
Calvin had never seen his younger roommate in this light. He always saw him as man who had it together. He now saw he was a man who needed to submit his control. To let go and let someone else take some of his burdens. And Calvin being a man wh likes to control without pain, he could give him exactly what Frankie needed. But will Frankie even want to explore this kind of kink? He was a stubborn man who didn’t enjoy being told what to do.
This story is definitely full of love and respect. I loved that it is different than other types of books on the subject of BDSM. It’s about exploring more mentally than physically. Yes! There is sex. Yummy sex. It does delve into a little pain but only the best kind. No whips and chains here and I was 100% good with that. I do enjoy all types of genres so I wasn’t disappointed, it was actually refreshing. I learned right along with these two that the world of kink isn’t all about sex.
Overall…it’s a great start to a new series! I loved the characters. The story. The heat. It has the perfect blend of sexiness and heart. I am excited to find out whose story is next up.
Quotes:
“It’s hard to explain,” I told him.
“Try. Convince me to say yes.”
“Damn, I didn’t think you could get any hotter, but there’s something stupid sexy about you in those glasses.”
“Well, it sure as hell isn’t supposed to tickle.”
Kara's Review

Exploration is the first book in the Kinky in the City series by the fantastic Quinn Ward. I’ve been a fan of this author for a long time and I’ll follow her anywhere she goes… Exploration is M/M with extra heat and a little kink. I quickly became attached to these characters and was invested in their journey! Frankie had to take over his family business. He loves the restaurant, his mama and his brothers, but it’s become more of a burden than his family legacy. Frankie likes to unwind in a very unconventional way. It’s his way of letting go. Calvin, Frankie’s roommate, doesn’t like seeing that side of Frankie. He’s finally out of the closet and wants to live his life the way he’s dreamed of. Frankie is perfect for him. The sub he’s been looking for and the man he wants. Calvin is older, and wants to show Frankie how it can be. He wants to control him and show him he just needs to let someone take care of him. Tell him what to do. Show him pleasure. Frankie is stubborn and needs to learn to let things go. Calvin is a natural Dom and he wants to show Frankie how great they can be together. Can they learn together? Will Frankie’s past keep him from moving forward with Calvin? I enjoyed this story! Frankie and Calvin have great chemistry and I loved their banter. I loved that they were open to learning together. I loved Frankie’s brothers and I can’t wait to see who’s next in the story.

Quinn writes LGBTQ romance with a kick. Their stories center around the relationship building between the characters, but also shows how compatible they are in the bedroom (or wherever else the urge strikes).