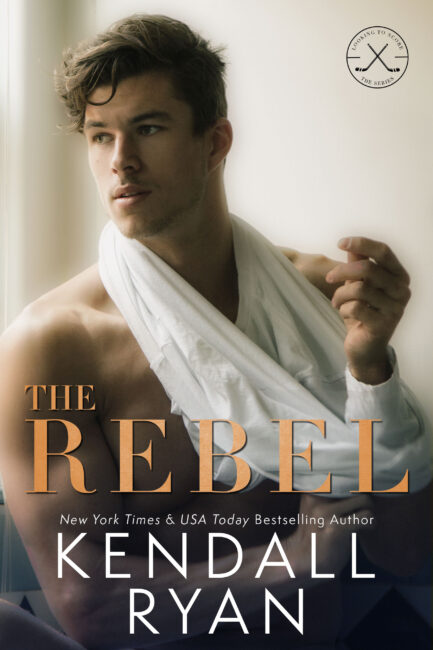 We shared one hot night together back in college before our paths took us in different directions.

But now, the most brilliant and beautiful woman I’ve ever met is back in my life. And the chemistry I remember? It’s more combustible than ever.

Except…our fling is forbidden and must exist only in secret. Her rules, not mine.

I can’t be her forever. I’m not that guy, and even she knows it.

But I can’t stay away from her either. I’m determined to claim not just her body but her heart, even if that’s the one thing she’s vowed not to give me.

The Rebel is the first book in the Looking to Score series by Kendall Ryan. I read One Night with the Rebel in January so I have been waiting for this book. If you can’t wait then go grab the free prequel. If you can wait, it’s all good. The prequel is the beginning of this book.
Holt and Eden had one hot night together six years ago in college. It was unexpected and unforgettable. They never saw each other again after their night together but he knew where she was. Not easy to hide when she was the daughter of a former Governor, the granddaughter of a hockey team owner and the girlfriend of an NFL player. And now, she was the owner of said team and the ex-girlfriend of the hockey player. A player who played for the team she owned. I know, right? Fun times. Anyway, it’s been six years since their night and now they are back in the same room. Her office…
Holt owned a security firm and his newest client was the Boston Titans. He knew he would see her but he wasn’t sure if she would even remember him. She does and the sexual tension is through the roof. It’s still there. Their connection. Their chemistry. But can they act on it? They are both single but can it really happen?
Eden has so much riding on her shoulders. The team. The fans. The critics. The press. Will Holt be the one person she can open up to? To let in? Holt also has his own stresses and hasn’t let anyone in. Can they make this work? And what is it? A fling? A relationship? A friends with benefits situation? It’s both complicated and easy at the same time. I loved it. It’s an easy read full of laughter, sexy times, and fun. I am so excited about this new series.
Quotes:
“We don’t have to do anything more than you’re comfortable with. Just like last time.”
“And just like last time, I want you.”
She kisses me like this moment is important, like I mean something to her other than being a guy she can swap a few orgasms with. It’s a dangerous thought for me to be thinking because I know the gulf that separates us.
“I don’t know how I got lucky enough to find you again, Eden.”
Kara's Review

The Rebel is book one in the new Looking to Score series by Kendall Ryan! I love it when one of my favorite authors starts a new series and it’s hockey! Kendall gives good hockey romance! This is the perfect way to start the series. The new female owner of the team and her new security detail. The best part? They knew each other six years ago and even spent one night together. So it’s a second chance hockey-ish romance! Eden and Holt spent one fantastic night talking and kissing and much more. Then she was gone the next day. Now it’s six years later and all the chemistry they had is still there and they don’t know what to do about it. She’s the owner and he works for her, they can’t get involved. Right? Wrong! They start out slow, but their feelings are just too strong. It’s like they were fated to meet again and again. It’s just meant to be. But what happens when the world finds out? Will the team be supportive or turn on them? I loved Holt and Eden! Holt is sexy and open with his feelings. Eden is independent and good at her job. They have more in common than they thought and they realize they are better together than apart! Overall, I laughed, teared up, got hot and bothered and can’t wait to get to know all the new characters more!

A New York Times, Wall Street Journal, and USA Today bestselling author of more than three dozen titles, Kendall Ryan has sold over 3 million books and her books have been translated into several languages in countries around the world.

Her books have also appeared on the New York Times and USA Today bestseller lists more than 100 times. Ryan has been featured in such publications as USA Today, Newsweek, and InTouch Magazine.

Subscriber to the newsletter: http://www.kendallryanbooks.com/newsletter/