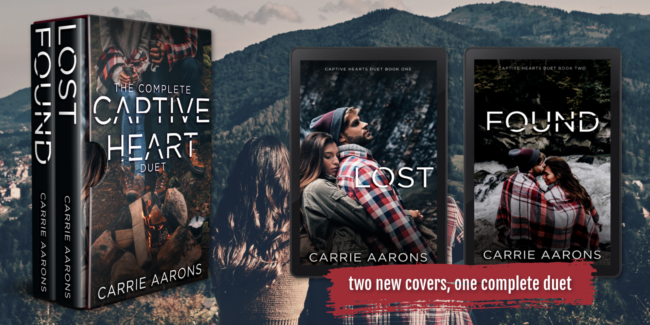 Charlotte never thought she’d be staring down the barrel of a gun when she walked into her thankless bank job. Especially one that is held by her childhood neighbor and the boy who broke her young heart, Tucker. And the last thing she expected was to become his hostage. What ensues is a story of heartbreak, recovery, passion, and prevailing through it all to save the love that still burns between them.

“Aarons takes a typical boy next door romance and turns it on its head. No flowers and sweet, swoon-worthy late night stolen kisses here. There is grit and suspense and a struggle to move forward; and Aarons does it flawlessly.” -The Read Report 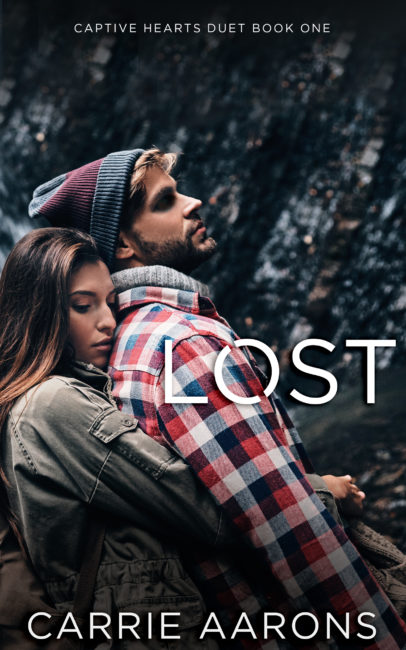 We knew each other a lifetime ago. And then…
We lost childhoods. We lost opportunities. We lost love.
Fate is giving us another chance. But a chance at what?
Because even though we’ve been brought back to each other under the worst of circumstances…
We are still. So. Damn. Lost.

Lost is the first book in the Captive Heart Series and what a way to start. This is definitely not your ordinary love story. It is however about second chances and figuring out what two people truly want out of life.

Charlotte has a very mundane kind of life. She is a twenty-five year old credit analyst that goes through the motions. Always has. She grew up doing what she was expected and hated it. The only thing she loved growing up was her books and the boy next door. She could always count on her books but the boy was a totally different story. And sooner than she ever thought possible, she will add to their story…

Charlotte got to work early at the bank, as usual. She was alone until a man came through the doors and that’s when her life was turned upside down. She realized right then that she hadn’t lived. And now he was back. Tucker. The boy next door. He was now a man but he didn’t look like the same person. He looked lost. Unhealthy. Mean. What happened to the Tucker she once knew and loved? Well…she is about to find out, if she wanted to or not.

Charlotte and Tucker are and always were complete opposites. She didn’t have friends and he was the most popular boy in school. And it looks like they are still living on the opposite sides of each other except it’s for different reasons. They used to be secret friends, hiding away from everyone else. But, now they will have the chance to get to know one another again without interruption, outside influence, and judgement. Will they find love again or will they find that they never had it?

This story is unique in the way that brings them back together. I love second chance love stories, and this was a great one. They were both lost. She was lost in her mundane existence and he was lost in a haze. Will they be found?

I thought Charlotte is pretty kickass. She is strong, protective, loving to a fault, and wants more out of life. She just has to figure out how. And Tucker…oh Tuck, not gonna lie, I wanted to slap him a few times but I also wanted to give him some love. He got to me, that’s for sure. Together, it’s not always easy but easy isn’t always fun. They definitely have their challenges and that is what makes it such a great ride.

Overall…it’s a unique, sexy, sassy, and crazy ride. I can’t wait for the next book!!

“You know what’s harder than having everything ripped away? Never getting anything you want in your entire life. Try that one on for size, Tucker.” She glares at me, her big eyes stony and filled with rage.

“I’m going to make this right.” He throws open the door to my cabin and pulls me inside. 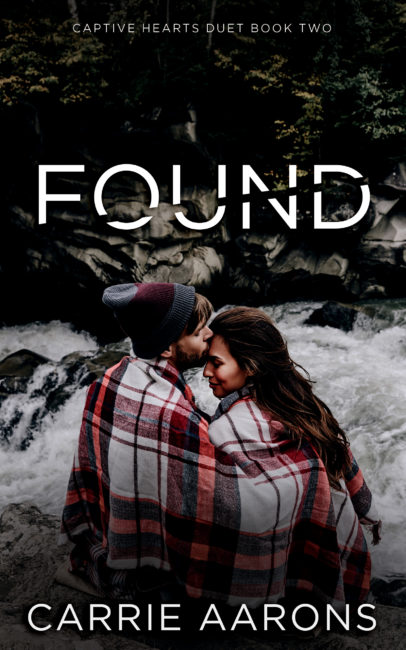 We found each other where no else could.
Found a purpose. Found ourselves. Found love.
Again.
But then life got in the way.
Three years later and the people that we once were are nowhere to be found.
Can our love survive everything we’ve put it through?
Can we find a way back to each other…
Again?

Found is the conclusion to Tucker and Charlotte’s love story. You must read Lost first to fully understand their epic romance and heartbreak. I thought it was a unique and addictive story so I was happy to know that I wouldn’t have to wait long for the second and final book.

Three years. It doesn’t sound like a long time but when you are not able to reach out and touch the love of your life it feels like a lifetime. That is how Charlotte feels but the day has finally come when she gets him back. Except, he is not the same person she fell in love with. Again. He is cold. She knew it would be awkward but she had hoped they would run into each other’s arms and be the “us” she has dreamed about. Charlotte is staying positive that she will get her Tucker back but when he doesn’t even want to look at her, she is scared that he could be lost forever.

Tucker loves Charlotte but he feels like he doesn’t deserve her. She should move on. Find someone that won’t hurt her. He wished things were different but he can’t even touch her. He knows she wants to go back to the way things were but they are different people now. Hardened. Their relationship was tainted three years ago and they can’t just forget about what happened. They fell in love. Then ripped apart. Everyone knows their story. Tucker hates that it hurt Charlotte but he doesn’t regret their love but can they find each other again?

Communication. That is what Tucker and Charlotte need to do. Talk about the negative and not just about the positive. They need to talk about what is on their minds and not walk on eggshells. They also need to get it on! But when your man won’t talk or even look at you with hungry eyes…you need to fight for what you want. And Charlotte is ready to get her man. To prove to him that they can find their way back to each other. But, can lighting strike twice?

I love Tucker and Charlotte! They are strong, sexy, and so much more. Their story isn’t ever easy but worth it.

I think she’s trying to play me. That tease.

“What does a girl gotta do to get fucked around here?”

“I definitely don’t remember this happening at the end of Sixteen Candles.”

When she isn’t writing, Carrie is busy binging reality TV, having a love/hate relationship with cardio, and trying not to burn dinner. She lives in the suburbs of New Jersey with her husband, daughter and Lab/Great Dane rescue.