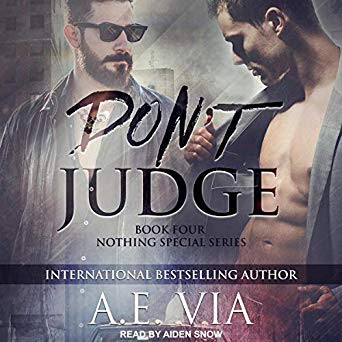 Blurb
Detective Austin Michaels didn’t think life could get any better after he was accepted into the most notorious narcotics task force on the East Coast, headed up by two of the baddest Lieutenants with the Atlanta Police Department – Cashel Godfrey and Leonidis Day.

Michaels knew he would fit right in as the team’s sniper, having received his fair share of commendations for marksmanship. He was just as badass as the rest of the twenty brothers that made up their team. But when Michaels lets their prime suspect get away from a huge bust with over a quarter of a million dollars in drugs, he’s willing to do whatever it takes to make it right.

Left with no other options, God chooses to bring in outside help, calling on his long-time friend and bounty hunter, Judge Josephson.

Judge was considered one of the best trackers during his enlistment in the United States Marine Corps. After retiring, he used those skills to become one of the most sought out fugitive trackers in the country. When Judge gets a call from his old friend needing his help, he quickly tells God, yes.

Don’t Judge is the fourth book in the Nothing Special series. I’m in LOVE with this series and these men. I’ve been listening to them in audio and Aiden Snow is so fanfreakingtastic I can’t get enough! We’ve known Austin Michaels for a while and I love him! He’s new to God and Day’s team as their sniper. And he’s yummy! He’s been watching his team fall in love and be happy and he wants that. He wants someone to share his life with like all his friends do. Something goes wrong and a suspect gets away. God calls an old bounty hunter friend, Judge, for help. Michaels doesn’t want help. Judge doesn’t want a partner. They don’t like each other. At all. But their anger quickly turns to lust. As they are chasing their suspect, they get to spend extra time together. They are so hot and sexy together. Two alpha males fighting for dominance. Michaels has a softer side. He loves to cook and read romance novels! Judge is rough and tough, but he falls for Michaels. When Judge’s family needs him, he runs. He’s afraid of what he feels for Michaels and he just can’t deal. He’s going to have to beg and plead to get him back and I loved watching Judge beg! I loved this story! This is one of my favorite series’ of all time and I wish I could listen to Aiden all day! I love the way he uses his gruff voice to show emotion. He’s the perfect narrator for these sexy men. Overall, I loved every second of it. I laughed, got choked up, swooned, got hot and bothered and chuckled a lot. I loved seeing the whole team again and I can’t wait to listen to more from this series!

A.E. Via has been a best-selling author in the beautiful gay romance genre for five years now, but she’s no stranger to MM. She’s been an avid reader of gay lit for over fifteen years before she picked up her laptop to place her own kiss on this genre. She’s also the founder and owner of Via Star Wings Books, having published a couple great new up and coming MM authors.


A.E. has a Bachelor of Arts in Criminal Justice from Virginia Wesleyan College that she used to start her own paralegal firm after she graduated in 2008. She spent five years preparing and filing bankruptcy petitions for struggling blue collar workers who couldn’t afford to file with a lawyer. It was a rewarding and satisfying career… but another path called to her. Writing.


A.E.’s writing embodies everything from hopelessly romantic to adventure, to scandalous. Her stories often include intriguing edges and twists that take readers to new, thought-provoking depths.


Now that she’s gotten over her 10 books published hump, she’s kind of known now for her hardcore, play rough and love hard, bad boy, alphas. However, she does like to push herself to step out of her comfort zone, exploring different tropes, but she won’t push herself into a whole other genre. She’s head over heels for gay romance and she has tons of more hot stories to tell.


Be sure to visit Adrienne on her social media pages and subscribe to her newsletter to never miss another release date! Go to A.E. Via’s official website http://authoraevia.com for more detailed information on how to contact her, follow her, or a sneak peak at upcoming work, free reads, VSWB submissions, and where she’ll appear next.