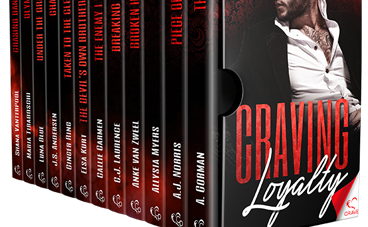 Loyalty.
Noun. ‘A strong feeling of support or allegiance.’
For some, loyalty can be bought. For others, it’s earned. But the thing about loyalty—it can change in an instant. All it takes is one act, one decision, and loyalty shifts to betrayal in the blink of an eye…a sin which cannot go unpunished.
Not in this world.
But sometimes things happen beyond our control, forcing our allegiances to change. Like the mob enforcer who wants nothing more than to seduce the assassin hired to kill him. Or the FBI agent who falls for the woman whose past holds ties with the mafia.
Yet, no matter the reason or motive, the consequences of betrayal are always deadly.
Because in this world everyone is…
Craving Loyalty

Are you a book reviewer?
Request a review copy here!

Chasing Danger
Chasing Danger might be a short read but it packs in a fucking punch. I am really not surprised since Shana is one kickass author. I have read all of her books and forever will. She isn’t new to darker romance but this one is different than the others.
Marx is a soldier in the Shams, a Irish gang in Boston led by somewhat of a father figure. When Riley’s stepdaughter is in danger, he puts Marx in charge of her safety. Delia isn’t used to this life. She has been avoiding it since her mother married a gang boss two years ago. Now, she is in the middle of it all. She just wants the danger to be lifted so she can go back to school. What she doesn’t expect is to feel so safe with Marx. He might be bad but she also sees the good in him. Will he be able to keep her safe or will distraction put them in even more danger?
Wow. There is a whole lot of story in this one! I read it in about an hour. I had to know what was coming next. I still do!
Quotes:
I chase danger the way others chase dreams.
“If I didn’t know any better, I’d think I was a funny bastard.”
This man wants to smile, but he’s never had a reason.
I want to give him that reason.